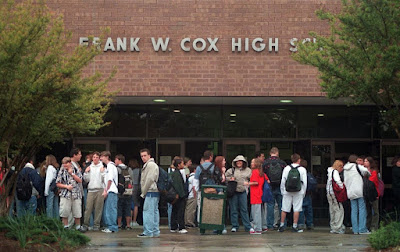 When it comes to getting itself embroiled in controversy. few public bodies show the ineptitude of the Three Stooges like Virginia Beach School Board.  The board's public relations skills are nil and those on its PR team truly seem to be utterly incompetent. A case in point is what many see as the board's anti-LGBT mentality in the wake of the abrupt cancellation of a Gay-Straight Alliance assembly at Frank F. Cox High School, the neighboring high school to my old neighborhood in Virginia Beach. The Virginian Pilot is carrying another guest editorial  on the issue which like that by Grace Bonney previously highlighted is authored by two individuals who I have known for years.  Like others, they call on the Board to clarify policies towards LGBT students who still face daily harassment and bullying in far too many instances.  While Virginia Beach likes to picture itself as a modern city, it remains among the most reactionary cities in Virginia with Christofascists still holding too much sway in the public arena and in school policies.  It is long past time that the city moved into the 21st century. Here are op-ed highlights:

AS ALUMNI of Virginia Beach City Public Schools, we have followed the cancellation of Cox High School’s Gay-Straight Alliance event with concern and dismay. While the event has been rescheduled, the School Board has neither acknowledged any potential homophobia inherent in the event’s postponement nor addressed the atmosphere of harassment that LGBTQ students face in Virginia Beach schools. We find this troubling.

Incoming School Board member Victoria Manning, who called for the cancellation of the GSA assembly, noted in The Pilot on Dec. 9 that certain parents were upset about “the timing and nature of the event.”

This is puzzling. The “nature of the event” was to promote acceptance of differences and combat bullying. Despite Manning’s language, we don’t find anything controversial in that objective, and we suspect that opposition to the event reflects ingrained homophobia as much as procedural error.

We agree that club meetings and assemblies during the school day must be rare. But we are concerned here about process.

We suspect not. We note that the planned GSA gathering was optional; surely a parent concerned about a child missing class time might simply have advised her son or daughter not to attend.

The school division’s policies in this area are, by the board’s own admission, ambiguous. We are interested in the history of school-day gatherings at Cox and other schools. Under what circumstances and for what organizations have such assemblies been held? Indeed, the Virginia ACLU has asked the School Board for such data.

Manning has suggested that her 11th-hour email to Edwards was the result of outreach from parents who were concerned about the impact of the assembly on classroom time.

We ask: What compels parents to call a School Board member to register alarm about a specific assembly? We wonder whether parents routinely object to pep rallies and sporting events that interrupt the instructional day. What about guest speakers? Holiday celebrations? Theatrical events? Awards ceremonies?

The Cox GSA assembly — which was designed to celebrate “love is love” after a gay student who was bullied attempted suicide — was directly related to preserving the sanctity of the classroom experience for all students.

Nationwide, LGBTQ teens are at higher risk for bullying and harassment, including verbal and physical assault, and nowhere is such marginalization more conspicuous, even systematized, than in our schools.

Human Rights Watch recently conducted a study on the treatment of gay and lesbian youth in Alabama, Pennsylvania, South Dakota, Texas and Utah and found that “almost all of the students interviewed reported encountering verbal harassment in their school environment, even in the most LGBT-friendly schools.”

Studies conducted by the Gay, Lesbian, and Straight Education Network found that 32 percent of LGBTQ students did not go to school at least one day because of feeling unsafe, 44 percent had experienced physical harassment, 22 percent had experienced stronger violence (61 percent never reported it), and 31 percent said the school had made no attempt to respond to those students who had reported attacks.

These statistics reveal the atmosphere of intimidation that predisposes gay, lesbian, bisexual and transgender youth to a suicide rate that is four times higher than that of straight youth.

Virginia has no law prohibiting bullying based on sexual orientation or gender identity in schools (nor does it provide legal protections for LGBTQ teachers and administrators).

We condemn the fact that Manning has received threats. We also wish that “What really happened with the Gay-Straight Alliance,” her Dec. 10 Pilot column, had acknowledged the hostility that LGBTQ students face daily.

We are eager to learn the specific strategies that the School Board will employ to clarify its policies — and, more importantly, to ensure the safety and well-being of LGBTQ students in Virginia Beach classrooms.

As I told one school board directly, from my dealings with the Virginia Beach School Board that stretch back more than 20 years, I have very little confidence in its willingness to do the right thing for LGBT students.   I am still waiting to be proven wrong.  As for the parents who complained, I suspect that many or all are Christofascists who view any effort to stem their mistreatment and abuse of others as an "attack on their religious freedom."  I'm sorry, but the public schools should stand firm against bully based on toxic religious beliefs.  Religious freedom rights and the right to attend school free from harassment belong to everyone, not just the falsely pious "godly Christian" crowd.
Posted by Michael-in-Norfolk at Monday, December 19, 2016