Trump Will Rule By Threats and Intimidation 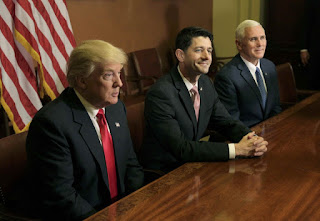 As Adolph Hitler rose to power, many conservative politicians and wealthy industrialist thought that they would be able to control Hitler and moderate his extremism.  History, of course, showed that these individuals were hubris filled fools.  A similar hubris has been on display among many Republicans, especially those like Mitch McConnell and Paul Ryan, who throughout the GOP primary and presidential campaign have smugly thought that they could rein in Donald Trump.  Now, with Trump maintaining his own security forces - hired mercenaries, if you will - unlike any previous president or president elect and his clear intent to threaten and intimidate Republicans who oppose him, it is quickly becoming apparent that these members of the GOP are just as stupid as their German counterparts from over eight decades ago.  In some ways, it will be delicious to watch these Republicans be crushed by Trump.  The draw back, of course, is that such defeats will only increase Trump's authoritarian rule.  A column in the Washington Post looks at the nightmare Republicans have brought onto themselves and the nation.  Here are highlights:

Back when Republicans were fretting about Donald Trump’s ideological inconsistencies and lack of devotion to conservative orthodoxy, one might have predicted that if he became president there would be constant tension within the Republican world, as everyone sought to shape administration policy and maximize his or her own influence.

That looks to be true — just not quite in the way we thought it would be. Instead of conservatives outside the administration pressuring Trump to adhere to conservative principles, we may see a situation where the pressure moves in a different direction, enforcing unanimity behind Trump’s agenda, whatever it may turn out to be. Rachael Bade reports today that there’s already a system being constructed to punish anyone on the right who questions Trump:

Since the election, numerous congressional Republicans have refused to publicly weigh in on any Trump proposal at odds with Republican orthodoxy, from his border wall to his massive infrastructure package. The most common reason, stated repeatedly but always privately: They’re afraid of being attacked by Breitbart or other big-name Trump supporters. . . . . An editor at Breitbart, formerly run by senior Trump adviser Steve Bannon, said that fear is well-founded.

Bade tells an interesting story about one Republican congressman who made some mild comments about how there might at some point be areas of disagreement between Trump and Republicans on Capitol Hill. He was skewered in Breitbart, then Sean Hannity — who has made himself into Trump’s Renfield — took up the criticism, and in short order the congressman was deluged with threats and abuse.

It’s awfully handy that the administration has Breitbart at its disposal, an influential (at least within the right) media outlet that can not only echo the White House line but also target dissenters for retaliation, supported by an army of online enforcers standing ready to take anyone who strays and make his or her life miserable.

What we’re seeing so far is a conservative movement that, whatever its prior feelings, is now utterly devoted to the greater glory of Trump. And the message is going out that anyone who objects is going to regret it. This is something conservatives have practice at — after all, the tea party movement spent a great deal of its time punishing those who showed any signs of insufficient devotion to the cause and maintaining unanimity through fear.

[N]ow, no matter what they thought before, members of the right are coming together around the idea that their goals demand unswerving loyalty to Trump. As Tim Alberta reports in National Review, conservative lawmakers “are understandably reluctant to preemptively criticize an incoming president who’s popular with their constituents back home — and who could jeopardize their political careers and livelihoods with a single retaliatory tweet.

[P]ublic dissent is going to be met with swift retribution. We know that Trump is hypersensitive to even the mildest criticism and intensely vindictive when it comes to those he feels have crossed him. It looks as though those tendencies are going to be embodied not just in his administration but also in the entire conservative movement.


The moral, of course, is that an amoral narcissistic bully should never be elected to any high office, particularly the presidency.  Sadly, what should have been so obvious to anyone rational was beyond the comprehension of angry white Trump voters that put emotion and their desire to reclaim their so-called white privilege ahead of all else, including the best interest of the nation.  We all will pay a high price I fear before this is all over.
Posted by Michael-in-Norfolk at Wednesday, December 21, 2016