Is Donald Trump a Traitor? 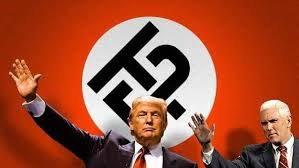 A piece in Salon looks at a question that has troubled me for some time but which has intensified since the Electoral College abandoned the intent of the Founding Fathers and certified Donald Trump's election despite his near 3 million vote loss in the popular vote.  The question?  Is Donald Trump - and by extension, many Republicans - Mitch McConnell certainly fits the description - traitors?  The answer in the piece, with which I have to concur is, yes, Donald Trump is a traitor. Worse yet, he and his Republican co-conspirators want to dismantle much of America's political tradition and  real Americans, by which I don't mean chest beating conservatives who constantly proclaim their patriotism, ought to be terrified. Given that Vladimir Putin aided and abetted Trump's election and also serves as Trump model for ruling, things once considered unthinkable may well soon begin to become reality. I truly fear the future that may lie ahead for my children and grand children.  Here are article excerpts:

During the 2016 presidential campaign, Republican nominee Donald Trump urged a foreign power, Russia, to interfere in the American election in order to undermine his Democratic rival Hillary Clinton. Russia complied. The American intelligence community, including the CIA and FBI, has reached a “strong consensus” that the Russians interfered with the presidential election in order to help Donald Trump win.

It has also been reported that Russian president Vladimir Putin personally directed this espionage operation. So serious was Russian interference in the American presidential election that the Obama administration warned Putin that it was tantamount to “armed conflict.”

Republican leaders in Congress were briefed on Russia’s interference in the presidential election and how it was targeted at elevating Trump and hurting Clinton. Senate Majority Leader Mitch McConnell and other congressional Republicans chose to block any public discussion of these findings. In what could be construed as a quid pro quo, McConnell’s wife, Elaine Chao, has been selected by President-elect Trump for a cabinet position in his administration.

Donald Trump’s flirtations with Russia and Vladimir Trump are part of a broader pattern of reckless and irresponsible behavior. Trump has numerous conflicts of financial interest that would appear to violate the Emoluments Clause of the Constitution. His sons, Eric and Donald Jr., were involved in a scheme (since withdrawn) that looked a lot like an attempt to sell access to his administration through million-dollar “charity” donations. Trump has threatened to violate the First Amendment by suppressing freedom of the press, has encouraged violence against Hillary Clinton and those he deemed his enemies, has suggested he would not respect the outcome of the election if he lost, and has promoted people widely regarded as white supremacists or white nationalists to senior positions in his administration. Donald Trump has also selected key advisers and cabinet level officials who have close personal and financial relationships with Russian leaders in banking, finance and government.

The sum total of these facts leads to a very troubling conclusion.

President-elect Donald Trump is a traitor. As suggested by Harvard University professor John Shattuck in the Boston Globe, Trump’s actions may approach the legal definition of treason as defined by United States federal law.

Members of the Republican Party who knew about Russia’s efforts to interfere with the presidential election and chose to suppress or block such information, for fear of hurting their candidate’s chances, are also traitors.

In light of Russia’s interference with the presidential election, Republicans and others who voted for and support Donald Trump are also traitors, at least to the degree that they do not now work against and denounce him.

Reconciling Donald Trump’s traitorous behavior with how Republicans and conservatives view themselves as the party of “patriotism” and “national security” is a puzzle. . . . The Republican claim that theirs is the party of national security and that they are better than Democrats at “keeping America safe” is also gutted by the legacy of 9/11 and George W. Bush’s imperial misadventures in the Middle East, which taken together constitute one of the greatest foreign policy failures in the history of the country.

Trump voters and other American conservatives have been subjected to a several decades-long disinformation and propaganda campaign, led by Fox News and the broader right-wing news-entertainment media. This has created an alternate reality that exists separate and apart from the empirical, fact-based world. . . . . As a group, in many regards American voters are not very sophisticated. They also do not have a schema for consistently and logically understanding and processing complex political events and issues.

Since at least the Cold War, Republicans and their media have savaged Democrats, liberals and progressives as “weak.” The are not “real Americans”; they are “cowards” or “sissies,” “Commies” or “traitors.” If Russia and Vladimir Putin had interfered to aid a Democratic candidate, it would be presented by Republicans as final proof that Democrats are fundamentally disloyal to America.

But because Donald Trump is a white male conservative his loyalty and patriotism are viewed by many Americans as a given. This is a manifestation of white male privilege in action and an example of how racism can damage the safety and security of the United States.

During the age of Obama, the Republican Party completed its devolution into a radical and revanchist organization that aimed to overthrow the standing norms and consensus politics that have governed the United States since at least World War II. Trump and the Republicans are now following through on this in ways heretofore unimaginable. They have chosen partisanship over patriotism in their support of the authoritarian Trump and his apparent foreign sponsor, Vladimir Putin. The Russians wanted to undermine and damage one of America’s most sacred democratic institutions. Donald Trump and his party aided and abetted them.

As I have said before, be afraid.  Very, very afraid.

Posted by Michael-in-Norfolk at Thursday, December 22, 2016