In Face of Evil, Don't be Silent 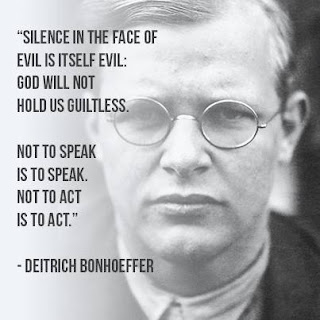 No doubt some Facebook "friends" and other social circle "friends" - specifically, those who voted for Donald Trump - likely wish I'd be quite and stop making my dismay evident over the election of Donald Trump, a/k/a, Der Fuhrer, and such "friends'" complicity in the undermining of America's constitutional order.  Such wishes will not be granted.  There is too much at stake and I refuse to "get over it" as these individuals tell me to do and I refuse to be quiet. The reality is that bad things happen when good people do nothing.   Stated another way, as set out below, “evil does not need your help; just your indifference.”  At this moment in time, far too many Americans are indifferent to the rising tide of racism and bigotry directed at ethnic and religious minorities, LGBT Americans, in some cases, women, and anyone who isn't a white right wing Christian. Elena Barr Baum, the director of the Holocaust Commission of the United Jewish Federation of Tidewater, has a guest editorial in the Virginian Pilot (prompted by growing white supremacist and anti-Semitic activities) that reminds why we cannot be silent in the face of evil.  Here are highlights:

When someone compares his movement to Nazism, quoting “the original German,” is it newsworthy? When someone calls for a “peaceful ethnic cleansing,” and leads his followers, gathered in the Ronald Reagan office building in Washington, D.C., in a raised-hand salute exclaiming “Hail, Trump,” should the media report this?

The alt-right media celebrated it. Where was the mainstream media, on Nov. 19 when Richard Spencer, the leader of the National Policy Institute – a white nationalist think tank – addressed his faithful this way, just blocks from the U.S. Holocaust Memorial Museum?

Spencer announced matter-of-factly that, “America was until this past generation a white country, designed for ourselves and our posterity.” He added, “It is our creation, it is our inheritance, and it belongs to us.”

Spencer’s statement goes against the very fabric of our Constitution and Bill of Rights.

While we are still getting over our history of enslaving other human beings, we are and were intended to be citizens of a land that believes all people are created equal. After much struggle, we have finally begun to make progress toward the civil rights and equality for all that our founding fathers spoke about so eloquently. People of all races, religions, genders and sexual orientations deserve the respect and the rights that America promises.

Why does Spencer’s hate speech, egged on by Nazi-saluting followers, not raise the warning flag to the majority of Americans?

While the mainstream media did not pay much attention to Spencer’s comments, Holocaust scholars and educators did. The Association of Holocaust Organizations, of which the Holocaust Commission of the United Jewish Federation of Tidewater is a member, issued a statement last week about the rise of such speech, signed by over 90 Holocaust institutions and over 70 scholars.

“We denounce racism and the politics of fear that fuels it. … We stand in solidarity with all vulnerable groups. We take Elie Wiesel’s words to heart: ‘I swore never to be silent whenever and wherever human beings endure suffering and humiliation.’ ”

The organization’s statement is a clarion: “We call upon all elected officials as well as all civic and religious leaders to forcefully and explicitly condemn the rise in hate speech and any attacks on our democratic principles. We call upon all media and social media platforms to refuse to provide a stage for hate groups and thus normalize their agenda. And we call upon all people of good conscience to be vigilant, to not be afraid, and to speak out.”

The Southern Poverty Law Center, a nonprofit watchdog for hate groups, reported that 867 hate incidents occurred in the 10 days following the November election. The trend has not subsided much.

Just last week, the white supremacist website the Daily Stormer (sound like “Der Sturmer,” the infamous Nazi-sympathizing newspaper in the 1930s?) called for “an old fashioned troll storm” on Jews and other minorities in Whitefish, Mont. Why? Because the mother of Richard Spencer lives there, and her business has shrunk with the increased media exposure of her son’s rancid ideology.

When the people of Whitefish, in a statement by their mayor, came out against Spencer’s brand of white supremacy earlier this month, the Daily Stormer in retaliation posted names and contact information of their targets, including a child, superimposing yellow stars of David on photos of them, and asked its readers to “take action.”

The Holocaust did not begin with killing. It began with words. It is time for good people to stand up.

The Holocaust Commission calls on the Hampton Roads community to heed the words of the late survivor Hanns Loewenbach, who ended every talk he gave to literally tens of thousands of people in schools, churches and military audiences with these words: “Evil does not need your help; just your indifference.”

Posted by Michael-in-Norfolk at Wednesday, December 21, 2016