Why Silence Equals Death in the Age of Trump 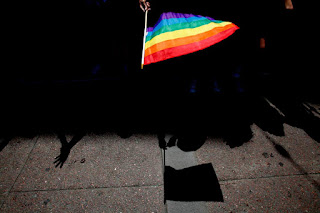 One of the things I worry about is the increased threats that LGBT individuals will likely face under the reign of Der Fuhrer, a/k/a Donald Trump, is the likely resurgence of anti-LGBT animus which will be eagerly fanned by Christofascists and their puppets in the Republican Party, including Der Fuhrer who seems to have sold his soul (or whatever approximates one in Trump's case) to secure the evangelical extremist Christian vote.  This has the potential to drive some members of the LGBT community back into the closet, particularly LGBT youth and those living in backward rural areas. For some, like myself and the husband, going back in the closet simply not an option.  We are simply too "out" and too well know by both friend and foe.  A piece in Vice makes the case of why we all must resist the urge to "pass" as straight or go back in the closet.  Long term, it is self-defeating even if potentially comforting in the short term.   Here are article highlights:

Since the moment Donald Trump was elected president, LGBTQ Americans have joined with members of nearly every other minority group in fretting about which of their hard-earned advances might suddenly be blocked or rolled back. Among the concrete gains currently at risk are an executive order prohibiting discrimination by some 30,000 federal contractors, a government interpretation of existing law that guarantees transgender students the right to proper accommodations, and a widely-praised new military policy that ended years of senseless discrimination against LGBTQ service members. Not to mention the triumph of marriage equality in all fifty states, a legal status that would be difficult (though not impossible) to reverse.

It's perfectly understandable that LGBTQ people would focus on the concrete policies and protections that a Trump government might imperil. Yet there is another layer of gains—perhaps more subtle, but every bit as crucial to the improvement of LGBTQ lives—that are also put at risk by the rise of Trump and what he represents: the full-throttled freedom to be and express ourselves, as we truly are.

This focus on authentic, expressive liberty, on the power of words and other forms of communication to shape the reality of our lives in unique and profound ways, has been one of the most enduring contributions of queer thought to American culture. It has special resonance for LGBTQ people because many (though by no means all) of us are able to "pass" as straight or cisgender. Those queer feelings or desires that make us part of the LGBTQ community are largely internal; while external signs can be discernible—especially for some trans and gender-nonconforming people—in general, what we feel at heart is hidden unless we make it known or are outed.

The corollary to this ability to pass has been the insistence by anti-LGBTQ forces that being queer is a "choice," and that we already have the same freedoms as everyone else—all we have to do is decide to operate as straight or cisgender, and we'll realize, Wizard of Oz-like, that we can serve in uniform (if we repress or control our "confusion"), marry (someone of the opposite sex), or use a public restroom (that matches our sex at birth). The insistence that we "choose" to be gay or transgender is another way of saying that we don't actually exist as gay or trans people, that everyone is naturally straight or cis, and some of us simply have a gender or sexuality "problem."

The age of Trump, which has already unleashed a wave of hate crimes, will bring a whole new level of pressure to cover as a way to minimize our vulnerability to genuine harm, either by the government or the public. Now is the time to remind ourselves that there is no true liberty without insisting on the freedom to be, and express, who we really are. In the face of those who will demand that we repress our queerness, what's most important for the future of queer lives under Trump is that we continue to come out, stay out, and show that we exist. Short of doing that, we'll only ever enjoy our rights under the condition that we "cover" who we really are, and those aren't rights or freedoms at all.

Of course, this challenge is nothing new for LGBTQ Americans, and we can look to our own history for guidance even in this unprecedented age. Queer people have always faced the choice of whether to assimilate as the price for acceptance or to insist on our right to be different. With the triumph of marriage equality, it often appears that the LGBTQ movement opted for assimilation over liberation. While there's truth to this, it is also true that nearly every major issue and policy our movement has tackled advanced not just our right to be like everybody else, but this broader ideal of expressive freedom—and not just for LGBTQ people, but for all Americans.

Ending the military's "don't ask, don't tell" (DADT) policy was not about allowing or integrating gay people into the military; we were already there. Instead, it was about ensuring that we could come out and serve honestly, about no longer forcing us to lie or pretend or play a role as a condition of service. The same was true of the more recent elimination of the military's transgender ban and, in a wider sense, the Obama Administration's transgender school guidance and support for transgender equality.

Legal protections against anti-LGBTQ discrimination can be crucial to one's livelihood. But they are equally crucial to allowing us to acknowledge, and thus to be, who we are.

The importance of these expressive freedoms can also be grasped by considering why their opponents sought to repress them. The reason DADT was so insidious was that it singled out a particular group for unfair punishment, and then prevented that group from defending itself, asserting its existence, and thus fighting to secure its rights. The reason hate crimes are so reprehensible is because they are used to intimidate entire groups as a way to police our behavior and expression. This is why denying discrimination protections is so contemptible—because without job safety in coming out, millions of Americans stay mired in the closet, unable to show the world just how unthreatening we truly are.

And without the freedom to marry, we were denied the opportunity to show the world that our love had the same worth and dignity as any other love. Keeping gay people silent and invisible—as war heroes and ordinary civilians—was key to preventing our advances. The creation of the closet reinforced the belief that, at best, we didn't exist, and at worst, we were a lurking threat to everything virtuous and worthwhile.

[R]eversal of these gains would make our lives far worse than they were before. Having increasingly built our lives around the freedom to express ourselves as we are, pressure to crawl back into the closet would not only be a harrowing loss, but would create all kinds of new hardships.

Rolling back state recognition of such relationships could mean imperiling legal protections for hundreds of thousands of children, and even severing ties between children and their parents.

In all these cases, advances in law have not been about social experimentation or political correctness; they have been about catching up with realities of American life. They were realities sometimes obscured by delusional or deceptive social conservatives hankering to return to an idealized America (back when it was, er, "great").

The good news is this: If these expressive freedoms are vulnerable to reversal, they are ultimately extremely difficult to roll back. . . . Even trying to block further advances will be increasingly tough, given the number of Americans from all backgrounds and political affiliations who now know and love someone who is LGBTQ.

What's needed now is solidarity among all these groups who prize and rely on expressive liberty for a life that's worth living. We've spent too many hundreds of years being forced to pretend we were something we're not; we all know how repressive, demeaning and inimical that was to the genuine pursuit of happiness. What's also needed is a redoubling of our own commitment to combatting our fear, to fighting the urge to repress or to pass or to cover, even when dangers confront us. If the LGBTQ movement (and its compatriots) have given the world anything worth protecting, it's been this invaluable contribution to the Enlightenment ideal that individuals must be truly free to be themselves, and the unforgettable lesson that silence, indeed, equals death.


#NotMyPresident.  I will personally, never, ever be closeted again.