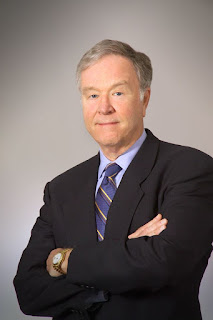 I have known the senior members of the Shuttleworth, Ruloff, Swain, Haddad & Morecocklaw firm, the firm that launched the challenge to Virginia's anti-gay animus motivated Marshall-Newman Amendment on behalf of fiends, Tim Bostic and Tony London, since the early 1980's.  We all originally belonged to the same law firm which in later years became a part of the Richmond based Williams Mullen mega firm.  Yesterday, Thomas Shuttleworth passed away after a battle with Parkinson's disease.  His obituary can be found here in the Virginian Pilot.    Back on May 15, 2014,  HRBOR's May Third Thursday event hosted by the law firm Shuttleworth, Ruloff, Swain, Haddad & Morecock.    It was moving hearing Tom speak at the event and I was very touched when he gave me a big hug.  I feel lucky to have known Tom. A piece in the Daily Press reviewed the beginnings of the lawsuit that brought marriage equality to Virginia.  Here are excerpts:

At their Norfolk home that June night, Bostic and London considered the pros and cons of pushing the issue in court. They came to their decision within 30 minutes, Bostic said. Just then, he said, a younger and less established gay couple walked past their home.

"If Tony and I wouldn't do it, who will?" Bostic said.

Meanwhile, Ruloff talked to Tom Shuttleworth, the senior partner at the Virginia Beach firm, Shuttleworth, Ruloff, Swain, Haddad & Morecock. Shuttleworth was quickly on board. "It's going to be a long, hard challenge, but if they're up for it, we're up for it," he said.

Over the next couple weeks, one of the Virginia Beach firm's associates, Charles Lustig — whom Ruloff called the law firm's resident "constitutional scholar" — researched the issue and drafted the lawsuit.

Lustig wrote: "By denying those individuals the same 'marriage' designation afforded to opposite-sex couples … the Commonwealth of Virginia is stigmatizing gays and lesbians, as well as their children and families, and denying them the same dignity, respect, and stature afforded officially recognized opposite-sex family relationships."

A week after the suit was filed, a Washington, D.C.-based lawyer, Matt McGill, learned of the case through news reports.

McGill works with Gibson Dunn & Crutcher, an international law firm based in Los Angeles that was heavily involved in the push to legalize same-sex marriage in California. McGill then called Erik Porcaro, a childhood friend — and an attorney with the Virginia Beach law firm.

Bostic said he found it amazing that the lawyers involved on the plaintiffs' side are mostly "older straight white men."

"They don't have any dog in this fight," he said. "That they're willing to put themselves out there and support us, it's kind of awe-inspiring. It's humbling."

And yes, the husband and I were there when Tim and Tony got married thanks to Tom Shuttleworth's willingness to put himself out there for what was right.  Tom, you will be missed.  My condolences to Tom's family. 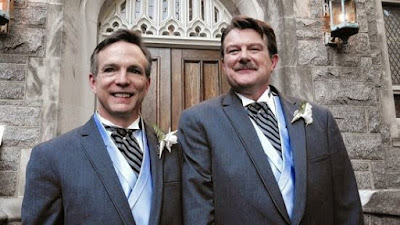 Posted by Michael-in-Norfolk at Saturday, December 24, 2016