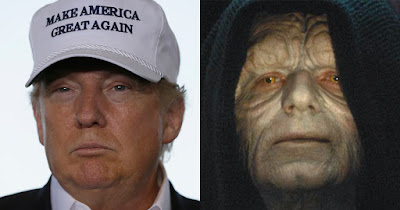 Yesterday, the Electoral College utterly ignored the intent of the Founding Fathers and confirmed the election of a man fundamentally unfit for the office of the presidency.  In doing so, this electors - the ones who should truly be called faithless electors - set America down the road akin to what history has shown us before when republics commit suicide even as most citizens are blind to what has just happened.  Yesterday and January 20, 2017, will parallel the death of the Roman Republic when Octavian, a/k/a Augustus, was voted the title "Imperator" by the Roman Senate following the defeat of Marc Antony and Cleopatra at Actium in 31 B.C., the naming of Benito Mussolini as prime minister of Italy in 1922, and, of course, the election of Adolph Hitler as Germany's Chancellor in 1933.  Far too few realized what they were witnessing and by the time they did, it was too late.  One has to wonder whether "friends" who voted for Trump and gleefully reject my concerns and those of others will wake up or instead be ready to "follow orders" and help eliminate their neighbors and supposed friends.  Trump will not bring out the best in people and his circle are reminiscent of Hitlers coquetry of monsters.  An op-ed in yesterday's New York Times looks at the tragedy that has occurred.  Here are excerpts:

Many people are reacting to the rise of Trumpism and nativist movements in Europe by reading history — specifically, the history of the 1930s. And they are right to do so. It takes willful blindness not to see the parallels between the rise of fascism and our current political nightmare.

But the ’30s isn’t the only era with lessons to teach us. Lately I’ve been reading a lot about the ancient world. Initially, I have to admit, I was doing it for entertainment and as a refuge from news that gets worse with each passing day. But I couldn’t help noticing the contemporary resonances of some Roman history — specifically, the tale of how the Roman Republic fell.

Here’s what I learned: Republican institutions don’t protect against tyranny when powerful people start defying political norms. And tyranny, when it comes, can flourish even while maintaining a republican facade.

On the first point: Roman politics involved fierce competition among ambitious men. But for centuries that competition was constrained by some seemingly unbreakable rules. Here’s what Adrian Goldsworthy’s “In the Name of Rome” says: “However important it was for an individual to win fame and add to his and his family’s reputation, this should always be subordinated to the good of the Republic … no disappointed Roman politician sought the aid of a foreign power.”

On the first point: Roman politics involved fierce competition among ambitious men. But for centuries that competition was constrained by some seemingly unbreakable rules. Here’s what Adrian Goldsworthy’s “In the Name of Rome” says: “However important it was for an individual to win fame and add to his and his family’s reputation, this should always be subordinated to the good of the Republic … no disappointed Roman politician sought the aid of a foreign power.”

America used to be like that, with prominent senators declaring that we must stop “partisan politics at the water’s edge.” But now we have a president-elect who openly asked Russia to help smear his opponent, and all indications are that the bulk of his party was and is just fine with that. (A new poll shows that Republican approval of Vladimir Putin has surged even though — or, more likely, precisely because — it has become clear that Russian intervention played an important role in the U.S. election.) Winning domestic political struggles is all that matters, the good of the republic be damned.

And what happens to the republic as a result? Famously, on paper the transformation of Rome from republic to empire never happened. Officially, imperial Rome was still ruled by a Senate that just happened to defer to the emperor, whose title originally just meant “commander,” on everything that mattered. We may not go down exactly the same route — although are we even sure of that? — but the process of destroying democratic substance while preserving forms is already underway.

Why is this happening? I’m not asking why white working-class voters support politicians whose policies will hurt them — I’ll be coming back to that issue in future columns. My question, instead, is why one party’s politicians and officials no longer seem to care about what we used to think were essential American values. And let’s be clear: This is a Republican story, not a case of “both sides do it.”

So what’s driving this story? I don’t think it’s truly ideological. Supposedly free-market politicians are already discovering that crony capitalism is fine as long as it involves the right cronies. It does have to do with class warfare — redistribution from the poor and the middle class to the wealthy is a consistent theme of all modern Republican policies. But what directly drives the attack on democracy, I’d argue, is simple careerism on the part of people who are apparatchiks within a system insulated from outside pressures by gerrymandered districts, unshakable partisan loyalty, and lots and lots of plutocratic financial support.

For such people, toeing the party line and defending the party’s rule are all that matters. And if they sometimes seem consumed with rage at anyone who challenges their actions, well, that’s how hacks always respond when called on their hackery.

One thing all of this makes clear is that the sickness of American politics didn’t begin with Donald Trump, any more than the sickness of the Roman Republic began with Caesar. The erosion of democratic foundations has been underway for decades, and there’s no guarantee that we will ever be able to recover.

But if there is any hope of redemption, it will have to begin with a clear recognition of how bad things are. American democracy is very much on the edge.

And none of this, sadly, is new or anywhere close to new. In September 2015, Business Insider, not known as a far-left journal, updated the 1990 (!) Vanity Fair interview with Ivana Trump, who asserted that the Donald kept a book of Hitler's speeches at his bedside.

(This corrected the erroneous belief that the Donald kept a copy of Mein Kampf, as if that would have been better.)

And in the years since, Benedict Trump has had the opportunity to learn advanced demagoguery from Lee Atwater, Karl Rove, and the Romney campaign, which explicitly stated that the truth or truthiness of a claim was irrelevant to whether it was used.

Sadly, I think that we can mark the end of democracy in the United States to the day that the networks chose to broadcast a vacant chair on an empty stage at a Trump rally rather than a live Bernie Sanders rally.

And I am further dismayed by the decision of Benedict Trump to keep his own private army of brownshirts, accountable to no one, to complement Trump's Secret Service protection.