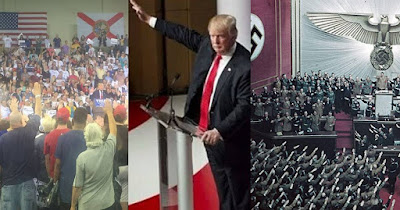 The previous post looked at the sins of the media in the 1920's and 1930's in acting in a manner that ultimately normalized Mussolini and Hitler until it was too late to stop the horror that they unleashed. But the media wasn't the only part of society that failed to stand up for the rule of law and decency. Much of the German population went right along with Hitler and the Nazi policies.  Later, many feigned ignorance about the worse atrocities and the death camps.  Now, frighteningly, many Americans are acting just as Germans did as Hitler rose to power and upended the constitutional order. Theorist Hannah Arendt described the phenomenon well and made it clear why we must hold our "friends" accountable: The problem, the personal problem, was not what our enemies did, but what our friends did. Friends ‘coordinated’ or got in line.” Many Americans are "getting in line" with no thought to the long term consequences.  Americans, especially on the right, like to see themselves as exceptional.  What we are seeing shows that many Americans are only too happy to close their eyes, get in line, and be guided by base instincts and hate and bigotry.  Germany ultimately paid a horrible price and millions lost their lives.  Are we headed toward a similar disaster?  Here are highlights from a piece in Huffington Post on this issue:

[R]eactions to Trump and his supporters have a way of separating ideas that usually move in tandem. Facts and truth are suddenly unrelated. Power no longer implies responsibility. Legitimacy and decency are now somehow passengers on separate ships. In this dynamic, People magazine can champion both the perpetrator and the victim and see no contradiction or betrayal. Lilla can use the victory of a campaign steeped in identity politics to highlight the ineffectiveness of identity politics. And Lerner can argue that a campaign “advanced” by sexism, racism and xenophobia can tell us much about the targets of that bigotry, i.e. that they need to behave differently, but little about the supporters of that campaign.

So, why the rush to defend Trump’s supporters? Why the self-recriminations? Why the willingness to stretch the bounds of legitimacy to accommodate Trump’s antics? Much has been written about Trump’s demagoguery and its similarity to totalitarian leaders of the past, but what about Trump’s opponents? Are many of us borrowing a page from totalitarianism without realizing it? Are we empowering him? Are we coordinating?

The word Gleichschaltung is often translated from the German as “coordination” and refers to the process of ― politically speaking ― getting in line. It often appears in books about the Nazi era. German Jewish philologist Victor Klemperer and German journalist Joachim Fest wrote about the personal cost of coordinating in their respective memoirs. German author Sebastian Haffner and Americans including journalist William Shirer wrote about the propaganda and politics of coordination.

German-born Jewish political theorist Hannah Arendt, in one of her last interviews, explains it best.

“The problem, the personal problem, was not what our enemies did, but what our friends did. Friends ‘coordinated’ or got in line.” And this coordination was not necessarily due to the “pressure of terror,” said Arendt, who escaped Germany in 1933. Intellectuals were particularly vulnerable to this wave of coordination. “The essence of being an intellectual is that one fabricates ideas about everything,” and many intellectuals of her time were “trapped by their own ideas.”

People rejected the uglier aspects of Nazism but gave ground in ways that ultimately made it successful. They conceded premises to faulty arguments. They rejected the “facts” of propaganda, but not the impressions of it. The new paradigm of authoritarianism was so disorienting that they simply could not see it for what it was, let alone confront it.

The faulty premise that empowered Hitler and helped place him in the German mainstream was called the Dolchstoss or the legend of the “stab in the back.” It argued that, despite all of the evidence to the contrary, Germany was winning World War I only to have politicians surrender prematurely.

Hitler, as a political figure, was the embodiment of this hack theory. While many rejected Hitler’s anti-Semitism and bellicosity, his deep sense of having been wronged by Germany’s surrender in World War I ― a war in which he fought ― gave him authenticity. It also created a hole in the German Republic’s legitimacy that he and his followers barreled through.

In his 1940 book, Germany: Jekyll and Hyde, Haffner explains this relationship between impression and propaganda, even for those opposed to the Reich. He writes, “Outside of Germany people often wonder at the palpable fraudulence of Nazi propaganda, the stupid incredible exaggerations, the ludicrous reticences concerning what is generally known. Who can be convinced by it? They ask. The answer is that it is not meant to convince but to impress. It addresses emotion and fantasy. Nazi propaganda seeks to create in our minds tenacious ideas and fantasies.”

In Haffner’s time, the tenacious ideas and fantasies were the subhuman images of the Reich’s enemies. Many Germans rejected the “facts” of this propaganda: that Czechoslovakia or Poland posed existential threats to Germany and the German people, but the impression of the propaganda remained. “The image,” Haffner wrote, “of the Czechs and Poles as a snub-nosed, unpleasant, dwarfish half-ape brandishing a revolver, whip or rubber truncheon at a number of barely clad women, children, and blond men bound to posts.” Who could trust such a person? Why risk it?

Trump’s propaganda about Mexican rapists and Muslim terrorists operates in a similar way.

While on the campaign trail in February, Trump urged followers to “knock the hell” out of protesters, promising to pay their legal bills if they were arrested and charged. That same February in Fort Worth, he promised a crowd that he would “open up our libel laws” so that news outlets can be sued for writing “false” or “purposely negative” articles. In July, he urged Russia to interfere in the election on his behalf, later saying he was joking. In September, he urged still other supporters to “monitor” polling stations. In October, he promised when victorious to throw his rival, Hillary Clinton, in jail. And just recently he advocated revoking the citizenship of Americans who burn flags.

So, in the last year, Trump has flirted with or, maybe more his style, groped and pawed at totalitarianism, yet the advice from many is to “give him a chance” ― or to coordinate.

“Divided government” became a trick card in Shirer’s 1960 history, The Rise and Fall of the Third Reich, when Hitler pushed through the Enabling Act and, “In five brief paragraphs,” took the power to legislate, approve treaties, and initiate constitutional amendments away from Parliament. A divided government essentially “committed suicide,” according to Shirer, and bequeathed its power to a dictator.

There were many others, but “dominance” made them difficult to recognize. Joachim Fest writes in his memoir Not I, “At first, the countless violations of the law by our new rulers still caused a degree of disquiet. But among the incomprehensible features of those months, my father later recalled, was the fact that soon life went on as if such state crimes were the most natural thing in the world.” Those months would turn to years. Not the thousand years that Hitler had predicted, but enough to cause millions of deaths.

We should not waste our time or imaginations trying to reconfigure Trumpism to explain why all of the “good people” supported him. It is more important to see it for what it is and resist. Hopefully, they will join us. If not, it will not be necessary to call them names, they will have named themselves.


Some argue that America can survive four years of Trump and Trumpism.  I am not so confident that such is the case.  History tells us otherwise.

Posted by Michael-in-Norfolk at Wednesday, December 21, 2016