Neither Free nor Fair 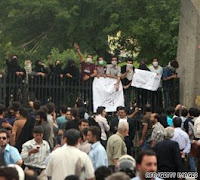 As turmoil in Iran continues the Washington Post's editorial correctly notes that even if Mahmoud "We Have No Homosexuals in Iran" Ahmadinejad won the election as he claims - something I tend to personally doubt - the manner in which protesters are being attacked, wounded and likely killed makes it clear that the Islamic fundamentalist government is a fraud and holds on to power by force and the use of terror. Iran's Supreme Leader Ayatollah Ali Khamenei has ordered an investigation into allegations that the country's presidential vote was marred by ballot fraud, but I suspect that the result of that investigation is already a foregone conclusion unless done under the eyes of international observers. Here are some highlights from the editorial:
*
What we can say for certain is that the election was neither free nor fair. When a regime peremptorily chooses which candidates can run; shutters newspapers, Web sites and television bureaus; silences text messaging; and throws critics into prison -- such a regime should not expect its pronouncements on election results to garner any respect.
*
[T]here are principles that the [Obama] administration could be defending even now, squarely supporting the rule of law and democratic expression in Iran. The United States could make clear that a government wanting to be taken seriously by the international community should not use violence against peaceful protests, arrest opposition leaders and their followers, jam radio broadcasts, or block Internet use. It could call for a transparent process to address opposition claims of fraud.
*
But it is now undeniable that many, many Iranians reject the Ahmadinejad regime and much of what it stands for, at home and abroad. The presidential campaigns revealed tremendous popular ferment in Iran and large swaths of discontent with current economic, foreign and social policies, including the repression of women. U.S.-Iranian relations are unlikely to flourish as long as so many voices there remain suppressed. As Mr. Obama began doing in his Cairo speech, the United States has to find a way to speak to Iran's people as well as the leaders who claim to represent them.
Posted by Michael-in-Norfolk at Monday, June 15, 2009