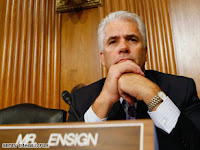 I am continually baffled by the way some of the loudest anti-gay members of the GOP either are secretly seeking gay sex on the side like Ed Schrock or having affairs and cheating on their wives with other women. The latest case in point is Republican Sen. John Ensign of Nevada (pictured at left) who wants to protect marriage from us gays, but has no problem trashing his marital vows for another women. No doubt he will make a tearful act of contrition and the sheeple of the Christianist far right will give him a free pass. The hypocrisy is simply mind boggling and note how the cuckolded wife takes the guy back. Here are some highlights from CNN:
*
Republican Sen. John Ensign of Nevada Tuesday admitted an extramarital affair with a woman who had worked for him. Ensign would not identify the woman, but said both she and her husband had been "close friends." Her husband, he said, also worked for him. "Last year I had an affair," the senator told reporters outside his office in Las Vegas. "I violated the vows of marriage. It's absolutely the worse thing I've done in my life."
*
The senator's office also released a statement from Ensign's wife, saying, "Since we found out last year we have worked through the situation and we have come to a reconciliation. This has been difficult on both families. With the help of our family and close friends our marriage has become stronger. I love my husband."
*
Ensign's spokesman, Tory Mazzola, told CNN that Ensign and a campaign staff member carried on the affair from December 2007 through August 2008. Her husband was an official Senate staff member for the senator.
Posted by Michael-in-Norfolk at Tuesday, June 16, 2009

God, I love the GOP! Full of racist, sexist, homophobic and above all, hypocritic assholes. And these are the opponents to letting gay people marry? LMAO. Yes, they are that bright, shining light on the hill for the sanctity of marriage. Gays marrying will kill marriage, but cheating won't? These people are pathetic.