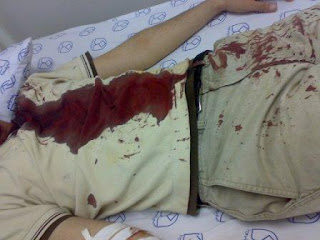 Andrew Sullivan is doing a terrific job of trying to keep abreast of what is happening in Iran. Unfortunately, it appears gristly as fundamentalist goons are attacking protesting university students and breaking into their dorms. We need to take a close look because this is what the actions of a theocratic government run by religious fanatics looks like. It's not a pretty sight and it's what we would have here if the Christianists ever succeeded in taking over the government. It literally sickens me to know what's happening to young people who merely want freedom. Here are some twitter messages coming out of Iran via Andrew's blog:
*
Guards are Shootings in Tehran and Police car being attack by protesters
*
friend on phone from sadatabad. he says violent street battles between Basij and people. cars on fire.
*
they push ppl & students into the dormitories then throw tear gas, sometimes attacking them with anything they have
*
Basij Militia attacking people with teaser, stone, stick and knife like rabid dogs.
*
moussavi demo at 4pm this afternoon in 19 cities announced. expect millions.
*
Then, there is this You Tube post from a street incident:

Raw Story has additional videos of the various protests occurring in Iran and the USA here.