How to Setup a Proxy for Iran Citizens

My thoughts continue to go out to the brave opponents of the Islamic dictators in Iran. 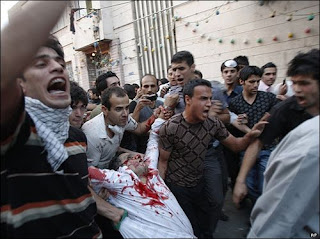 As Andrew Sullivan has reported for several days now, many Iranian protesters are using twitter to get news out as to what is happening in Iran. The problem is that the Islamic dictatorship may well seek to shut down Internet access and shut off the news outflow. Here are the points being circulated by the opposition to the mullah's regime via Andrew's blog which I am sure are not welcomed by Ahmadinejad:
*
This list was being passed around among the resistance in Iran today:
*
1. Remove Khamenei from supreme leader because he doesn't qualify as a fair supreme leader
*
2. Remove Ahmadinejad from president because he took it forcefully and unlawfully
*
3. Put Ayatollah Montazeri as supreme leader until a review group for the ghanooneh asasi ( "constitution" ) is set up
*
4. Recognize Mousavi as the official president
*
5. A goverment by Mousavi and start a reform of the constitution
*
6. Free all political prisoners without any ifs ands or buts, right away
*
7. Call off any secret organization such as "gasht ershad"
*
Obsidian Wings has more on this issue - some of which is technically way over my head when in comes to computer savvy. If this information is correct and one has the know how, it is possible to set up proxies to help by pass Iranian restrictions. Here's an overview:
*
From my tentative understanding, Iran's network is a lot like China's in that it's very centralized. This post explains (and illustrates) that the Iranian Internet traffic passes through a centralized bottleneck. (Imagine if the Holland Tunnel were the only way into Manhattan). With this bottleneck in place, it's easy to filter traffic. Just like the post office could theoretically block every envelope going to San Francisco, Iran can block packets going to the IP address for "Facebook" or "Twitter." (Great NYT article on these basics here).
*
So here's where "proxies" come in (and techies, please help me out here if my understanding is off). Let's say you want to send a letter to San Francisco, but the post office doesn't allow it. Well, if you know that some dude in Kansas would forward your letter on to San Francisco, then you could go ahead and mail your SF-bound letter, but it would appear to the post office like it's going to Kansas.
*
So that's how tweets are getting through. They're essentially being sent to "middlemen" proxy servers -- which, in turn, allows the information to pass "in disguise" through the filter. It's like a digital Underground Railroad. (Great overview of proxies and services like Tor here).
*
For those with the technical know how, instructions on how to set up a proxy can be found here. I admit that it is beyond my capabilities. Without a simple platform like Blogger, this blog would not exist.
Posted by Michael-in-Norfolk at Monday, June 15, 2009