Roots of a Warped View of Sexuality 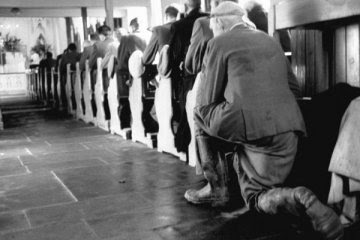 As I have noted many times before, the Roman Catholic Church - in which I was raised due to my Irish Catholic heritage - has a very warped view of human sexuality. If sex is engaged in for any reason other than procreation, it is bad, if not evil. Indeed, anything that is enjoyable would often suspect to the bitter old queens at the Vatican. The irony is that - at least theoretically - celibate men who know nothing of sexual intimacy themselves dictate what is good and evil about loving sexual relationships. The Irish Times has an interesting and thought provoking column that looks at the Catholic obsession that sex is taboo and how economics and celibate clerics both played a role. Given the huge number of Irish Catholics in the USA and the large numbers of Irish clergy imported to the USA and elsewhere, what happened in Ireland spread far beyond its shores. Here are some highlights:
*
Irish names are prominent wherever in the English-speaking world clerical child sex abuse has been spoken of. Even allowing for the uniquely high number of Irish men among Catholic priests and religious worldwide, this phenomenon is striking. Nowhere else in the Roman Catholic world has another nationality been as dominant among clerical child sex abusers. What was so different about Irish Catholicism that it gave rise to this?
*
WHY IS CLERICAL child sex abuse more prevalent in Irish Catholicism? To answer that, it is necessary to go back. Until 1845 the Irish were a happily sexually active people. With an abundance of cheap food, the population grew. Patches of ground were subdivided with ever-decreasing acreage, producing a sufficient supply of potatoes. In 1841, the island of Ireland had a population of 8.1 million. By 1961, the country having gone through the Famine and emigration, it was 4.2 million.
*
Another effect was an end to subdivision of holdings and diversification away from the potato to other crops, cattle and dairying. This wrench in land use had a defining effect on Irish sexuality. An economic imperative dictated vigorous sexual restraint as, regardless of family size, just one son would inherit. Others – sons and daughters – emigrated or entered the church. This late 19th-century pattern persisted into the 1960s.
*
Sex became taboo. Allied to prudery and a Catholic Church fixated on sex as sin, sensuality was pushed under. A celibate elite became the noblest caste. They had unparalleled influence through their dominance of an emerging middle class, the fact that they were educated when most were not, and the control they had over what there was of an education system and healthcare.
*
In tandem, Rome was experiencing one of its most dogmatic papacies under Pius IX. The longest serving pope (1846-1878), he lost the Papal States and eventually Rome itself to Italian reunification. As his temporal power decreased, he increasingly emphasised the eternal, and compounded a trend – extant in Catholicism since the French revolution – of alienation from this vale of tears. Life became a test, a preparation for death and eternal life under the eye of what Archbishop Diarmuid Martin described last weekend in another context as “a punitive, judgmental God; a God whose love was the love of harsh parents, where punishment became the primary instrument of love”.
*
As well as preaching absolute loyalty to Rome (Pius promulgated the doctrine of Papal Infallibility in 1870) the Vatican’s celibate foot soldiers preached chastity as the greatest virtue. Irish women were expected to emulate the Virgin Mary. In 1854, Pius IX promulgated the Doctrine of the Immaculate Conception – that Mary was born without original sin – embedding still further in the popular Irish Catholic mind a profound association between sex and sin.
The clergy preached that celibate life was superior to married life; that sexual activity outside marriage was evil and even within where the intention was not procreation. Sexual pleasure was taboo, powerful evidence of an inferior animal nature that constantly threatened what was divine in the human.
*
The sermons of Irish Catholic clergy for most of the 120 years between 1850 and 1970 seemed dominated by sex. . . . It is clear that, due to massive repression, Irish male sexuality in particular became, for some, redirected into areas where its expression was least likely to be discovered. For many Irish men, it seems, the combined weight of mother and church ensured that women became a no-no. Some then turned to children. They were accessible to clergy, particularly. With boys it was even easier. No one suspected anything untoward in seeing a man, especially a cleric, with a boy, not least in single-sex institutions.
*
As we learn more and more of our past it becomes clear we were a deeply dysfunctional people – particularly our men – at home and abroad. That this dysfunction persisted is all too painfully clear, as the 2002 Royal College of Surgeons research makes clear.
Posted by Michael-in-Norfolk at Saturday, June 20, 2009

Maybe the best writing on this awful cult that I have read.

Will the church be recognized for what it shows itself to be?

Will Ireland brake from the church?