Message to Obama: We Supported You. Time to Live up to Your Promises 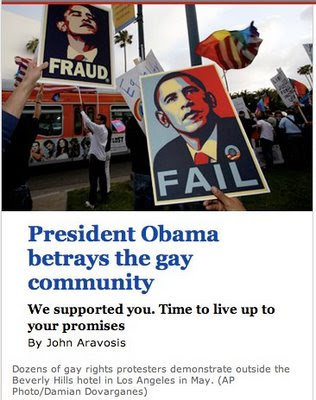 John Aravosis of America Blog has a column over at Salon that looks at the issue addressed in my last post. I haven't minced my words on my frustration with Obama - neither has John. Here are some highlights:
*
Team Obama keeps telling lesbian and gay Americans like me to be patient. If we just wait a little longer, administration officials whisper to us lovingly (and out of earshot of the media), after the White House finishes with healthcare reform and getting the troops out of Iraq, your time will come. In the meantime, cheer up -- we put a gay band in the inaugural parade!
*
Everyone loves a parade, but we don't like being betrayed. And while gay and lesbian Americans were initially willing to cut our new president some slack, the president's now-clear reticence to follow through on even one of his many campaign promises to the gay community has put the Democratic Party on the precipice of an ugly and very public divorce with this once-solid constituency.
*
But a funny thing happened on the way to equality. Rather than clouds opening up and angels descending from on high, Barack Obama became president and things never got better for the gays. In fact, they got decidedly worse.
*
The president would like us to believe that he's awfully busy being president, and if we only wait a little while longer, we'll get our rights. Of course, the president isn't too busy to stab the community in the back by continuing the military discharges, defending DOMA, and comparing us to pedophiles. (On Wednesday, White House spokesperson Robert Gibbs was given a chance to repudiate the DOMA brief's language about incest and pedophilia and would not.)
Posted by Michael-in-Norfolk at Wednesday, June 17, 2009