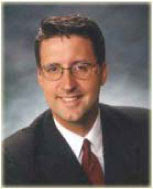 In my view, there are few bigger hypocrites on the face of the earth than the Christianists - especially the "professional Christians" who make a living disseminating a message of hate and then living off the moneys contributed by the sheeple they prey upon. It's all about them and to Hell with the rights of anyone else. A case in point is Brad Dacus, the president of the Pacific Justice Institute (pictured at left - looks like a likely closet case in my opinion, btw). Dacus' personal piggy bank, Pacific Justice Institute, has filed a complaint with the California Public Utilities Commission over the $250,000 contribution by Pacific Gas and Electric Company to the group fighting to maintain the right for gays to marry. Here's what they whiner had to say according to 365gay.com:
*
“It is outrageous that a mammoth utility used my money to undermine the values of families in my community,” said Brad Dacus.
*
I guess it is beyond Dacus' bigoted and feeble mind to imagine how gays feel being compelled to pay taxes to local, state and federal governments that either pretend that LGBT citizens have no equality under the law or actively take away our rights - e.g., the Virginia Marriage Amendment passed through the efforts of professional haters like Dacus, Don't Ask, Dont Tell. The list goes on and on. But then, for false Christians like Dacus, freedom is a one way street that only gives rights to the self-anointed. Here are some more details on Dacus' whining from 365gay.com:
*
“Proposition 8 has no relevance to the supply and distribution of energy services to its customers. As a corporation which has been given near monopoly status, its use of money extracted from customers to influence an item appearing on the ballot that does not promote the welfare of customers relative to energy is an abuse of trust,” the complaint states.
*
It asks the Public Utilities Commission to conduct an investigation and hold hearings as to the lawfulness of the contribution. In addition, the complaint requests that the “Commission take all appropriate actions to remedy this matter, including fines, available under the law.” Under the California constitution, the commission has the power to conduct such an inquiry. The commission has not yet responded.
*
Hopefully, the Commission will tell Dacus to put it where the sun doesn't shine.
Posted by Michael-in-Norfolk at Friday, September 19, 2008