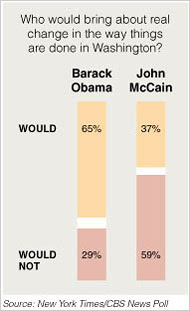 The poll results should be no surprise to anyone with a brain, but nevertheless it is good to see that perhaps American voters are beginning to finally wake up. If so, it's a case of better late than never, although I have to wonder why has taken so long. The New York Times is reporting on a new poll that shows that 65% of voters believe that Barack Obama would bring about change where as only 37% believe such would be the case under a McSenile/Palin regime. In short, a McCain presidency would be a a third Bush term and more of the same - which would be pretty bad indeed based on what the Chimperator and the GOP have brought upon the country. I suspect that the 37% who believe in McCain are mostly Christianists and racists who currently support the Chimperator or who cannot get past their bigotry. Here are some story highlights:
*
Despite an intense effort to distance himself from the way his party has done business in Washington, Senator John McCain is seen by voters as far less likely to bring change to Washington than Senator Barack Obama. He is widely viewed as a “typical Republican” who would continue or expand President Bush’s policies, according to the latest New York Times/CBS News poll.
*
The contest appeared to be roughly where it was before the two conventions and before the vice-presidential selections: Mr. Obama had the support of 48 percent of registered voters, compared with 43 percent for Mr. McCain, a difference within the poll’s margin of sampling error, . . .
*
But the Times/CBS News poll suggested that Ms. Palin’s selection has, to date, helped Mr. McCain only among Republican base voters; there was no evidence of significantly increased support for him among women in general. . . . . By contrast, at this point in the 2004 campaign, President Bush was leading Senator John Kerry of Massachusetts, the Democratic challenger, by 56 percent to 37 percent among white women.
*
Among other groups, Mr. Obama had a slight edge among independents, and a 16-percentage-point lead among voters ages 18 to 44. Mr. McCain was leading by 17 points among white men and by the same margin among voters 65 and over.
*
This poll found evidence of concern about Ms. Palin’s qualifications to be president, particularly compared with Senator Joseph R. Biden Jr. of Delaware, Mr. Obama’s running mate. More than 6 in 10 said they would be concerned if Mr. McCain could not finish his term and Ms. Palin had to take over. In contrast, two-thirds of voters surveyed said Mr. Biden would be qualified to take over for Mr. Obama, a figure that cut across party lines. And 75 percent said they thought Mr. McCain had picked Ms. Palin more to help him win the election than because he thought that she was well qualified to be president,
*
The poll suggested the urgency of Mr. McCain’s task: The percentage of Americans who disapprove of the way Mr. Bush is conducting his job, 68 percent, was as high as it has been for any sitting president in the history of New York Times polling. And 81 percent said the country was heading in the wrong direction.
*
More than twice as many said an Obama presidency would improve the image of the United States around the world, 55 percent, compared with those who believed a McCain presidency would do so. Mr. Obama also gets high marks for “sharing the values most Americans try to live by,” despite concerted Republican efforts to portray him as elite and out of touch with average voters. Sixty-six percent said Mr. Obama shared their values, compared with 61 percent who said that about Mr. McCain.
Posted by Michael-in-Norfolk at Thursday, September 18, 2008