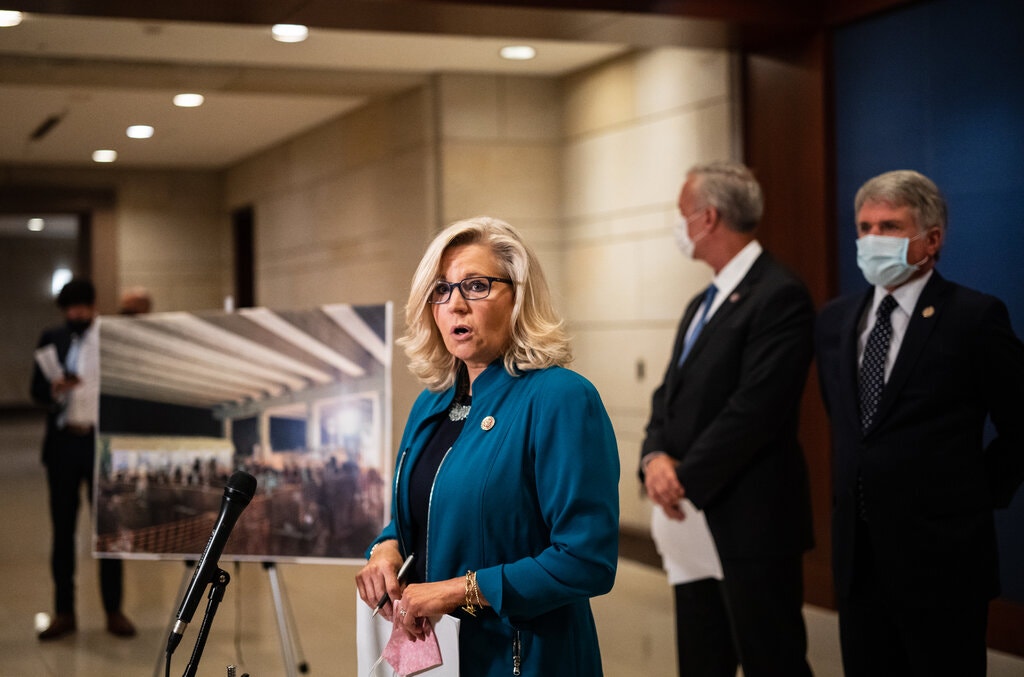 I am no fan of Liz Cheney but she has one attribute that separates her from most of the congressional Republicans: she refuses to promote the lie that Donald Trump won the 2020 election and that he bore no responsibility for the January 6, 2021 insurrection that stormed the U.S. Capitol.  Cheney's refusal to promote "the big lie" has earned her the wrath of many in the GOP House caucus who are gunning to drive Cheney from her current leadership position.  I'm not sure what Cheney's long term strategy is, but the fact that refusing to lie and prostitute oneself to Trump is now GOP heresy speaks volumes on how morally bankrupt the GOP has become.  A piece in the New York Times looks at the plot against Cheney.  Here are excerpts:

The first time defenders of Donald J. Trump came for Representative Liz Cheney, for the offense of having voted to impeach him, fellow Republicans closed ranks to save her leadership post, with Representative Kevin McCarthy boasting that their “big tent” party had enough room for both the former president and a stalwart critic.

Just three months after she beat back a no-confidence vote by lopsided margins, Ms. Cheney of Wyoming, the No. 3 House Republican, is facing a far more potent challenge that appears increasingly likely to end in her ouster from leadership. This time, Mr. McCarthy, the minority leader, is encouraging the effort to replace her.

Her transgression, colleagues say: Ms. Cheney’s continued public criticism of Mr. Trump, her denunciation of his lies about a stolen election and her demands that the G.O.P. tell the truth about how his supporters assaulted democracy during the Jan. 6 riot at the Capitol.

The turnabout reflects anew the passion with which Republicans have embraced Mr. Trump and the voters who revere him, and how willing many in the party are to perpetuate — or at least tolerate — falsehoods about the 2020 election that he has continued to spread.

The latest test for Ms. Cheney could come as soon as next week, when a growing group of Republicans is planning a fresh bid to dethrone her, with Mr. McCarthy’s blessing. Many of her colleagues are now so confident that it will succeed that they are openly discussing who will replace Ms. Cheney.

The tensions escalated on Tuesday, when Mr. McCarthy went on Mr. Trump’s favorite news program, “Fox & Friends,” to question whether Ms. Cheney could effectively carry out her role as the party’s top messenger.

With onetime allies closing in, Ms. Cheney, known for her steely temperament, has only dug in harder. Minutes after Mr. McCarthy’s TV hit, she sent her barbed reply through a spokesman, effectively suggesting that the minority leader and Republicans moving against her were complicit in Mr. Trump’s dissembling.

“This is about whether the Republican Party is going to perpetuate lies about the 2020 election and attempt to whitewash what happened on Jan. 6,” said Jeremy Adler, the spokesman. “Liz will not do that. That is the issue.”

One of the few Republican voices willing to rise to Ms. Cheney’s defense was Senator Mitt Romney of Utah, who has himself come under attack from his party for his unrepentant criticism of Mr. Trump — even getting booed at the Utah Republican Party convention on Saturday.

“Every person of conscience draws a line beyond which they will not go: Liz Cheney refuses to lie,” Mr. Romney wrote on Twitter.

[T]hey fear that Ms. Cheney’s refusal to stop criticizing Mr. Trump or condemning the events of Jan. 6 could weaken the party’s message going into the 2022 midterm elections, when they hope to portray Democrats as big-government socialists so villainous they should be voted out of the majority. It has also infuriated Mr. Trump.

Ms. Cheney told Punchbowl News that she would campaign in Wyoming — where she faces a primary challenge — defending her impeachment vote “every day of the week.” She told reporters that any lawmaker who led the bid to invalidate President Biden’s electoral victory in Congress should be disqualified from running for president. And she broke with leading Republicans when she said a proposed independent commission to investigate the Jan. 6 riot should focus on the attack on the Capitol by a pro-Trump mob, rather than scrutinizing violence by antifa and Black Lives Matter, as Mr. McCarthy and other Republicans have demanded.

A few days later, she drew attacks from the right for fist-bumping Mr. Biden at his speech before a joint session of Congress, and took to Twitter to defend herself for greeting the president “in a civil, respectful & dignified way.”