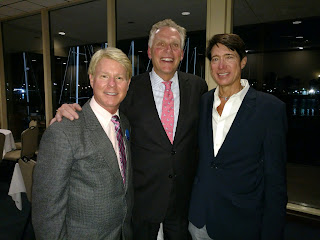 Having elections every year in Virginia, thanks to the state's off year state elections, is exhausting.  The results of the federal elections are barely over and the winners sworn in before the campaigns for state office begin.  The husband and I will be attending our first fundraiser for a friend running for re-election as a Democrat today and many more will follow before November's elections.  Among the most important races is that for governor where former governor Terry McAuliffe is running to be second governor to win two terms since the early 1970's. There are a number of contestants in the primary but McAuliffe is the most like to be able to win and prevent a right wing Republican from gaining office and damaging Virginia's progress.  A piece in The Hill looks at McAuliffe - and his likely lunatic GOP opponent - and makes it clear why backing someone who can win in November is so critical.  Here are article highlights:

Mark Shields, a celebrated pundit, once called Virginia a "hotbed of social rest." For much of the 20th century the state was run by the segregationist Byrd machine, stifling economic, social and political change.

There's an economic dynamism; it was voted the best state for business in a 2019 CNBC survey, and Amazon chose Virginia as the location of its second headquarters. It's more diverse, with Blacks holding 23 seats in the state legislature, the lieutenant governor's office and the mayor of Richmond. Spurred by the fast-growing Washington suburbs, politically it has gone from deep red to blue as both U.S. Senators are Democrats, former governors, a position the party has held for 16 of the last 20 years, and after a 44-year hiatus. Democrats have carried the state in the past four presidential elections.

The change from the staid yesteryear is exemplified by Terry McAuliffe, the energetic, ebullient, backslapping longtime Democratic operative who is favored to become the first two-term Democratic governor of the Old Dominion since the Civil War. He's running ahead in the polls for the June primary and the right-wing Republican drift, which predates Trump, will make it hard to defeat him in the fall.

McAuliffe was a successful governor from 2014 go 2018. Virginia is the only state that prohibits governors from serving consecutive terms.

He could have been a member of the Biden cabinet, a top ambassador — or made even more money. Why governor again?

“There is no other job where you can get out of bed every morning and know you can help people, make a difference. I love the job,” he told me in a telephone interview. With the engaging McAuliffe this has the added virtue of being true.

He was helped immeasurably in his first run when the Republicans nominated Ken Cuccinelli, an anti-gay rights, anti-immigration, climate change denier.

The Republicans, home — 50 years ago — of an exemplary moderate Republican Gov. Linwood Holton, may not have any candidate who could get the nomination and then win a statewide election.

Two of the top Republican candidates are: state senator Amanda Chase, a conspiracy buff who said the conviction of the Minneapolis cop who killed George Floyd "makes me sick," and called for martial laws to overturn Trump's electoral defeat last November; and Pete Snyder, a businessman and former pollster, who has morphed from chairing Mitt Romney's 2012 presidential campaign in the state to now boasting of support from Cuccinelli, Ollie North (the ringleader of Ronald Reagan's Iran-contra scandal) and Sarah Huckabee Sanders, Trump's former press secretary.

In his term as governor, McAuliffe restored voting rights to over 170,000 felons, presided over the state's booming economy — and with a record number of vetoes, rebuffed the Republican legislature's efforts to enact anti-gay and anti-immigration measures.

Then in 2019 Democrats won control of the state legislature, enabling his successor, Ralph Northam, to pass legislation ending the death penalty and expanding Medicaid. Working with Democrats, McAuliffe says he'll push through a “big and bold” agenda: getting teachers’ pay — historically low in this now progressive state ­— above the national average; state support for pre-K education; expanding voting rights and building on the state's high-tech presence to unleash more economic innovation.

His multiple opponents in the June primary say he's history, his time has passed — to which McAuliffe replies: “Why then was I the guy called on to help win the House of Delegates in 2019?” His campaigning and fund-raising prowess were important factors in that victory.

Several of his primary rivals are Black, but McAulilffe has the endorsement of about half the Black legislators, the Richmond mayor, and is expected to win the Black vote in June. He also has been embraced by most of the Democratic establishment, including Gov. Northam.

Like Joe Biden, he brings an effusive joy and outgoing charm to politics, which so often these days is dominated by a negative darkness.

“I am the happy warrior,” he says. “I love every part of it, campaigning and governing.”

Yes, we are backing McAuliffe and already have one of his signs in our yard.