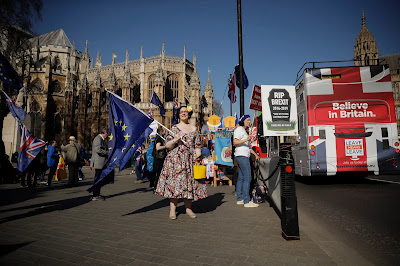 One of Vladimir Putin's long term goals has been to destabilize western democracies.  Toward this goal, Russian agents fanned the flames of the pro-Breit forces in the United Kingdom and at the same time worked to throw the 2016 presidential election to Donald Trump.  Putin has triumphed beyond his wildest dreams. Both the UK and the United States have been torn apart socially and politically as both nations have found themselves with two camps: (i) the rural, older, racist, xenophobic, less educated (and I would add, delusional) base that voted for Brexit and voted for Trump, and (ii) the urban, educated, younger, future facing base that voted to remain in the European Union and against Trump. In the UK, the division is becoming more extreme - and perhaps offers a glimpse of where the USA is headed - and is being likened by some to a civil war.  A piece in the New York Times looks at the simmering animosity splitting the British public.  Here are article excerpts:

Like the election of President Trump, the 2016 Brexit referendum vote crystallized divisions between cities and towns, young and old, the beneficiaries of globalization and those left behind.

And far from fading, the Brexit divide seems to have become entrenched within many British workplaces, families and social circles.

Friendships lost or relationships broken by Brexit have been bemoaned by politicians, featured in newspaper advice columns and spawned novels and at least one play.

According to one survey, more than a third of those who wish to remain in the European Union would be upset if a close relative married a strong leave supporter, suggesting that Brexit has morphed into a clash of values.

In the aftermath of the referendum, Relate, a counseling service, said that a fifth of the 300 relationship support practitioners surveyed had worked with clients who argued over Brexit. And analysts say Britons are increasingly likely to define themselves in relation to Brexit, rather than allegiance to a party, a dividing line noticed by psychotherapists too.“It’s a bit like 16th-century France between the Catholics and the Protestants,” said Brett Kahr, senior clinical research fellow in psychotherapy and mental health at the Center for Child Mental Health, adding: “I think there is a great deal of hatred of one position toward the other, and a lack of willingness to engage.

Some experts worry that, rather than open feuding, a chilly silence has descended across parts of a population that is often adept at avoiding confrontations.

“Brexit is ever-present in the consulting room,” said Sarah Niblock, chief executive of the United Kingdom Council for Psychotherapy. “It is now so excruciating, and so difficult for people to have conversations about Brexit — families, workplaces neighbors are so split — there is so much of a division between groups in society that it is almost as if the therapeutic room has become the last place people can talk with any ease.”

Those trying to make sense of it all include Candida Yates, professor of culture and communication at Bournemouth University, who is researching Brexit sentiment. . . . . For the remainers it was rather like a bereavement group. “There was this huge sense of loss. People talked about waking up on the day of the vote crying and in shock and they didn’t fully understand it themselves. They understood that they were upset but why did they feel so strongly? So it was a bit like a therapy group.”

For leavers there was more a sense of grievance than grief, Ms. Yates said, and a feeling “that they had been left behind, they had been forgotten, it was really this town-city divide.” Winning the referendum was an unexpected victory — some described it as a gift — but a precarious one.

There was a real feeling of ‘them and us’ and a feeling of powerlessness. They had managed to get this, but how long they could hang on to it, they didn’t know,” she added.
“People talked about it being like a civil war,” she said. Indeed, some mentioned Britain’s Civil War, which took place in the 17th century, or even episodes further back in history.  “They talked about the Civil War, they talked about the Norman yoke, people have gone back and back. It’s as if these earlier schisms had been reawoken.”

Frankly, I understand the feelings of the remainers.  I find it very difficult to understand or even remain close to those who voted for Trump.  Their vote, to me, demonstrated that I had misread who I thought these people were. They were not the intelligent, decent people that I thought they were.  Meanwhile, Vladimir Putin is smiling.
Posted by Michael-in-Norfolk at Saturday, March 09, 2019