HIV Is Reported Cured in a Second Patient 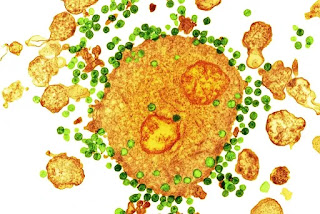 One of the things one encounters as a gay male is the effort of the far right and Christian extremists to depict all gays as diseased and a health care threat.  While HIV/AIDS is no longer the virtual death sentence it was three decades ago, treatment remains expensive.  Likewise, thanks to the greed of American pharmaceutical companies, preventive medications such as PrEP outrageously expensive in the USA - in contrast to Europe and Canada - and out of the financial reach of the majority of those in need of it.  The result is that a permanent cure remains the hope of many, including in the black community where heterosexuals are increasingly at risk of the disease in part due to the lack of access to preventive health care and the continued homophobia of black churches (much of the support for the anti-gay vote in the United Methodist Church came from African delegations).  Now, the New York Times is reporting on a second time where HIV seemingly has been cured. While the treatment regime is not of a nature making it easily replicated on a wide scale basis, it may give rise to future treatments.   Here are article highlights:

For just the second time since the global epidemic began, a patient appears to have been cured of infection with H.I.V., the virus that causes AIDS.

The news comes nearly 12 years to the day after the first patient known to be cured, a feat that researchers have long tried, and failed, to duplicate. The surprise success now confirms that a cure for H.I.V. infection is possible, if difficult, researchers said.

Publicly, the scientists are describing the case as a long-term remission. In interviews, most experts are calling it a cure, with the caveat that it is hard to know how to define the word when there are only two known instances.

Both milestones resulted from bone-marrow transplants given to infected patients. But the transplants were intended to treat cancer in the patients, not H.I.V.

Bone-marrow transplantation is unlikely to be a realistic treatment option in the near future. Powerful drugs are now available to control H.I.V. infection, while the transplants are risky, with harsh side effects that can last for years.

But rearming the body with immune cells similarly modified to resist H.I.V. might well succeed as a practical treatment, experts said.

“This will inspire people that cure is not a dream,” said Dr. Annemarie Wensing, a virologist at the University Medical Center Utrecht in the Netherlands. “It’s reachable.”

The new patient has chosen to remain anonymous, and the scientists referred to him only as the “London patient.”  “I feel a sense of responsibility to help the doctors understand how it happened so they can develop the science,” he told The New York Times in an email. Learning that he could be cured of both cancer and H.I.V. infection was “surreal” and “overwhelming,” he added. “I never thought that there would be a cure during my lifetime.”

The London patient has answered that question: A near-death experience is not required for the procedure to work. He had Hodgkin’s lymphoma and received a bone-marrow transplant from a donor with the CCR5 mutation in May 2016. He, too, received immunosuppressive drugs, but the treatment was much less intense, in line with current standards for transplant patients.

He quit taking anti-H.I.V. drugs in September 2017, making him the first patient since Mr. Brown known to remain virus-free for more than a year after stopping.

Although the London patient was not as ill as Mr. Brown had been after the transplant, the procedure worked about as well: The transplant destroyed the cancer without harmful side effects. The transplanted immune cells, now resistant to H.I.V., seem to have fully replaced his vulnerable cells.

Most people with the H.I.V.-resistant mutation, called delta 32, are of Northern European descent. IciStem maintains a database of about 22,000 such donors.

Several companies are pursuing gene therapies but have not yet been successful. The modification must target the right number of cells, in the right place — only the bone marrow, for example, and not the brain — and tweak only the genes directing production of CCR5.Several teams are working on all of these obstacles, Dr. McCune said. Eventually, they may be able to develop a viral delivery system that, when injected into the body, seeks out all CCR5 receptors and deletes them, or even a donor stem cell that is resistant to H.I.V. but could be given to any patient.Mr. Brown says he is hopeful that the London patient’s cure proves as durable as his own. “If something has happened once in medical science, it can happen again,” Mr. Brown said. “I’ve been waiting for company for a long time.”

If one looks to Africa, HIV/AIDS is not a gay disease.  It impacts millions of heterosexuals contrary to the propaganda of the far right and Christofascist.  Let's hope for a successful cure available for widespread use in the near term.