Mike Pence Is Not a "Decent Guy" 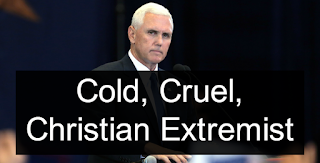 Joe Biden has a knack for making verbal gaffes.  Last week he made a major gaffe when he called Mike Pence a "decent guy."  Pence is anything but a "decent guy" and has a long track record of viscous homophobia that has cost lives and fueled bigotry and hatred. Being familiar with Pence's record, better descriptions of him might include, cold, cruel, hypocrite, dangerous or, as actress/activist Cynthia Nixon noted, insidious.   In an op-ed Nixon demonstrates why Pence is not a "decent guy" and, in my view, should be shunned by truly decent people.  Anyone who cares about LGBT family members or friends or who supports freedom of religion for all, not just Christofascists, should view Pence with horror. Many conjecture that Pence and his long time allies among anti-gay hate groups may in fact be behind much of the Trump/Pence regime's war on LGBT rights.  Here are op-ed excerpts:

When a chorus of progressives and LGBTQ activists, including myself, pointed out that a man who has built his career on homophobia and misogyny cannot possibly be considered “decent,” some dismissed it as just outrage Twitter. While Biden later walked back his comments and acknowledged that “there is nothing decent about being anti-LGBTQ rights,” I think it’s important to explain why calling Pence “a decent guy” is an affront to the real meaning of the word.

While I like and admire much about Biden personally and politically, especially his championing of the Violence Against Women Act, when he talks about Pence being “a decent guy,” he is putting politeness over policy. In effect, he is saying that Pence’s record doesn’t matter. So let’s talk about that record.As governor of Indiana, Pence signed a “religious freedom” bill that would have allowed LGBTQ discrimination. He refused to lift a ban on needle exchange programs until a preventable HIV outbreak reached epidemic levels. On the website for his 2000 congressional campaign, Pence suggested support for so-called conversion therapy, which is associated with higher suicide risk for LGBTQ youth. During Pence’s tenure as head of the Indiana Policy Review Foundation, it ran an article that suggested that women should have to be married to obtain birth control. He published an article urging businesses not to hire gay people, and his congressional website said that "homosexuality is incompatible with military service.”

Pence played a leading role in the Trump administration’s efforts to ban transgender people from military service, and he serves in an administration that seeks to define transgender Americans out of existence by stripping federal recognition of their gender identity. This is a man whose abhorrence of queer people is so notorious that even President Trump reportedly once joked that Pence “wants to hang them all.” (The White House later denied it.)

Pence has also made it his mission to take down Planned Parenthood, leading the GOP’s war on one of the nation’s largest providers of reproductive and transgender health care.
These are not the actions of a decent man. The fact that Pence does vile, hateful things while well-coiffed and calm doesn’t make him decent; it makes him insidious and dangerous.

It’s easy to say nice things about Pence when you’re not personally threatened by his agenda. If Biden were being directly attacked in the same way that our community is, I think he would see Pence from a very different vantage point.

When politicians of a certain age reminisce about the “civility” that used to define Washington, it’s telling that the old guard conveniently forgets that this decorum has never been extended to all.

[T]he problem isn’t getting along with Republicans. The problem is legitimizing an agenda of hateful discrimination. It’s about the fear that someone who would give Pence the benefit of the doubt in the name of civility might also be willing to bargain away our rights in the name of bipartisanship.

There is a sense among genteel Washington that partisanship is rude and boorish. But when you’re fighting for the rights of marginalized communities who are under attack, it’s okay to stop being polite. This is not a time for hollow civility. This is a time to fight.

If Democrats are too wedded to the collegiality of the Senate dining room to call out the Republicans who espouse homophobia, how are we ever going to stop them?

The Devil's Butler is a monster. A self-righteous, bigoted, selfish, hateful monster.
Joe needs to stop being so damn politically correct.