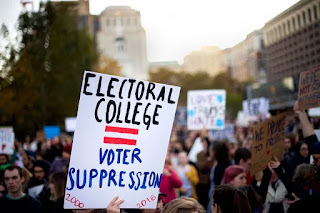 The Founding Fathers designed the Electoral College as a backstop to prevent an unfit individual from becoming President of the United States.  For the system to work, of course, electors had to put the good of the nation first and be willing to take political heat if they acted to prevent the election of an unfit demagogue.  Sadly, it 2016 the Electors failed to do their constitutional duty and the consequence was that we now have the most unfit and foul individual in the history of the nation occupying the White House and doing incalculable damage to America both at home and abroad.  Making matters worse, congressional Republicans utterly failed to restrain the misconduct of the executive branch.  The result is now that there is a growing movement among states to amend their own laws so that their electoral votes will go to the winner of the popular vote nationally and not simply whichever candidate wins in their state.  If the movement grows, the consequences for the GOP could be catastrophic since its candidates have failed to win the popular vote in two out of the last five presidential elections.  Needless to say, Republicans who increasingly cannot win on their policies and who want to rid the votes of those who do not support their extreme agenda do not support the concept of one person, one vote.  A piece in NPR looks at this urgent need - a true national emergency - to avoid future presidents who failed to win the popular vote.  Here are highlights:

An attempt at an Electoral College workaround is gaining momentum in the Mountain West.

Democrats in Colorado and New Mexico are pushing ahead with legislation to pledge their 14 collective electoral votes to the winner of the national popular vote — no matter who wins each state.

The plan only goes into effect if the law passes in states representing an electoral majority. That threshold is 270 votes, which is the same number needed to win the presidency.

Democrats have been stung by the fact that President Trump's victory marked the second time in five cycles that a Democrat lost the presidency while winning the popular vote. 2016 was the most egregious example, with Hillary Clinton winning 3 million more votes than Donald Trump, but losing the election. It was the largest margin ever for someone who won the popular vote, but lost the Electoral College.

Proponents of the national popular vote measures have argued that it's not political, but Republicans, who have benefited in recent elections from the Electoral College system, disagree.

And while a majority of the country has expressed support for giving the presidency to the person who wins the most votes — 55 percent in the latest Pew Research Center poll — there are sharp partisan divides.

So far, 11 states — including New York, California and New Jersey — have joined the effort along with the District of Columbia, putting the effort 98 votes short of its goal.

Colorado appears poised to join as the 12th state. The state legislature passed the bill Thursday, and Gov. Jared Polis is expected to sign it. In New Mexico, the legislation is awaiting consideration in the state Senate after the House approved it earlier this month.

Colorado state Sen. Mike Foote, who's sponsoring legislation, insisted that it's not a partisan response to Trump's 2016 win. Rather, he said, it's about upholding the democratic principle of one person, one vote.

"It's about time that every vote in the country counts equally," he said. "Right now, if you live in a state that is not a battleground state, then your vote doesn't count nearly as much."

Republican state Sen. Jerry Sonnenberg, who represents the plains east of Denver, worries about the impact of a popular vote on rural America. He said it would lead candidates to only campaign in the largest media markets, like New York and Los Angeles.Only Democratic-leaning states have joined so far. Swing states, like Ohio and Florida, have the least reason to sign on, which means it likely needs support from deep red states.

There's also a broader question as to whether it would be constitutional. The Electoral College is clearly written into the nation's founding document. Some insist that Congress would have to approve it since it would overhaul national election procedures. Other scholars have argued that states can't bind their electors to voters outside their boundaries.

Koza insists Article II gives states broad power to decide how they choose electoral delegates. Still, he expects a series of lawsuits if enough of the National Popular Vote efforts went into effect.

"It's about saying the status quo is unacceptable," he said. "This might not be the best way of changing it, but it's at least a way of forcing some change and forcing some discussion of it."


As for weakening the influence of rural voters, I am all for it.  Rural areas are the principal base for the racism and religious extremism that the GOP seeks to inflict on the majority of Americans.  Their ability to do so needs to end.
Posted by Michael-in-Norfolk at Sunday, March 03, 2019