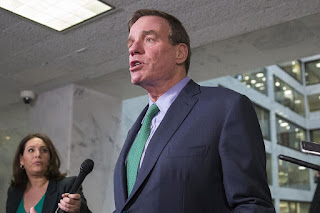 While Donald Trump continues to lie to the delight of his foul base and today tweeted “I am an innocent man being persecuted by some very bad, conflicted & corrupt people in a Witch Hunt that is illegal & should never have been allowed to start" two leading Congressional Democrats stated very different tales on TV news shows this morning. One was Virginia Senator Mark Warner and the other was Congressman Adam Schiff, each of whom stated that evidence of collusion has been revealed.  Warner backed off from a formal declaration but Schiff felt no such reluctance.  A piece in Politico looks at the development.  Here are highlights:


The top Democrat on the Senate Intelligence Committee said Sunday lawmakers have found "enormous amounts of evidence" into potential collusion between the presidential campaign of Donald Trump and the Russians during the 2016 election.

Mark Warner of Virginia made his remarks in response to an assertion that there is "no factual evidence of collusion" from the Sen. Richard Burr (R-N.C.), who is chairman of the Intelligence Committee.

As evidence, Warner cited on NBC's "Meet the Press" ongoing negotiations about Trump Tower and the dump of WikiLeaks material.

"Where that evidence leads, in terms of a conclusion ... I'm going to reserve judgment, until I'm finished," Warner said.

But he added: "There's no one that could factually say there's not plenty of evidence of collaboration or communications between Trump Organization and Russians."

Warner's House Intelligence Committee counterpart, Adam Schiff, said Sunday on CBS‘ "Face the Nation" that there's both "direct evidence" and "abundant circumstantial evidence" of collusion with Russia.Asked Sunday by NBC host Chuck Todd whether a Russia conspiracy without any actual evidence of a crime being committed could lead to impeachment of the president, Warner again said he would wait to reach his conclusion but qualified his statement by looking at history.

"I have never, in my lifetime, seen a presidential campaign, from a person of either party, have this much outreach to a foreign country and a foreign country that the intelligence community, and our committee has validated, intervened, massively, in our election and intervened with an attempt to help one candidate, Donald Trump, and to hurt another candidate, Hillary Clinton," he said.

Warner also said that some of the "key people" the Senate committee wants to talk to are "caught up" in the Mueller criminal investigations.

Ohhh
But they need to hurry up! Ugh. This administration is causing irreparable damage to this country.