While far too many Democrats - including Senators Mark Warner and Tim Kaine - are running around damaging the Democrat Party by embracing an idiotic "no forgiveness ever" political policy, Senate Republicans are stacking the federal judiciary with Christian extremists and alt-right extremists, a majority of whom have been rated as "unqualified"by the American Bar Association.  Rushing has tried four 9$0 cases in her legal career, none as lead counsel.

A case in point is the confirmation of 37-years old Allison Jones Rushing who, though totally unqualified, has been appointed to the U.S. Court of Appeals based in Richmond.  Rushing has been in legal practice only nine years and is now on a court one step below the U.S. Supreme Court.  Equally disturbing is Rushing background.  Besides clerking for Justice Clarence Thomas - in my view the absolute the mental midget of the Supreme Court - Rushing has a history with the hate group Alliance Defending Freedom ("ADF") which believes only far right Christians are entitled to freedom of religion and which has worked diligently to criminalize gays or, as a fall back make them subservient to the special rights of Christofascists.  Even I, a commercial transaction and real estate attorney with over 40 years of experience with both large and smaller firms, have tried more cases than Ms. Rushing both as lead counsel and as assistant counsel in appellate court cases, yet I would never pretend to have the trial experience necessary to sit on the 4th Circuit.

The New Civil Rights Movement looks at this shocking confirmation which over time will cause harm to countless Virginians.  Here are excerpts:

At 37-years old Allison Jones Rushing was just confirmed to become the youngest judge on the federal bench. A lifetime appointment, she will sit on the U.S. Court of Appeals for the Fourth Circuit, and based on her age she will be a federal judge for decades, as HuffPost just reported.

Rushing clerked for Supreme Court Justice Clarence Thomas and interned for the Alliance Defending Freedom (ADF), which is listed as an anti-LGBT hate group by the Southern Poverty Law Center. In case there's any question if her personal beliefs align with the ADF's, she has said she believes there are "moral and practical" reasons for not just opposing marriage equality, but for banning the marriages of same-sex couples.

Senate Republicans on Tuesday pushed through her confirmation, voting 53-44. Every Republican voted for her. Every Democrat voted against her, as Huffpost's Jennifer Bendery noted.

“She has practiced law for nine years. How many cases has she tried to verdict or judgment? Four. Has she been the lead attorney on any of those cases? No,” said Senator Dick Durbin (D-IL), who serves as the Ranking Member on the Judiciary Committee's Subcommittee on the Constitution. “That is the most scant, weakest legal resume imaginable for someone who’s seeking a lifetime appointment to the second-highest court of the land.”

Senator Durbin made his criticisms known on Monday when the Senate advanced her nomination: Republicans just advanced the judicial nomination of 36 year-old Allison Jones Rushing for the 4th Circuit (NC). She has practiced law for just 9 years, only tried 4 cases to verdict or judgment in her career (none as lead counsel), and isn’t even a member of the NC bar.

The National Center for Transgender Equality's Gillian Branstetter wrote last year that "Rushing has built her short career on promoting homophobic and transphobic prejudice, siding with dogmatic ideologues over the rights of everyday citizens."

The Alliance Defending Freedom, Branstetter adds, "lead the fight to criminalize LGBTQ people’s existence in countries around the world. including efforts to forcibly sterilize transgender people. They defend the damaging and debunked practice of so-called conversion therapy, which is now banned in 15 states including the District of Columbia," and "stand by the horrific claim that being transgender is 'most often' a result of child abuse."


The Trump/Pence regime continues to follow the template laid down by Hitler" constantly attack the free press and stack the courts with supportive extremists who lack credentials and legitimate experience.  Meanwhile, my Republican "friends" stick their heads in the sand and ignore the evil they are complicit in allowing. 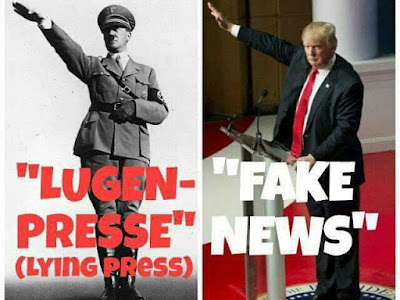 Posted by Michael-in-Norfolk at Wednesday, March 06, 2019

But of course they did.
It is their main purpose: to stack the courts with their minions.