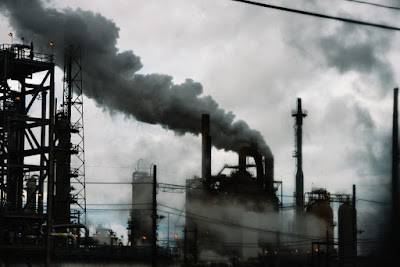 Yesterday a damning report on climate change was released by federal agencies (the report can be found here) that paints a frightening picture for the future if serious changes are not made to strengthen environmental laws and greatly reduce carbon emissions - all things that are the opposite of the Trump/Pence agenda.  The date of the release by the White House was thought to be aimed at having the dire warnings lost in the madness of Black Friday and the Thanksgiving holiday weekend.  If nothing else, the Trump/Pence regime can be counted on to be deceptive and disingenuous at all times.  But back to the report.  For those living in coastal areas, sea level rise will be a major problem.  Meanwhile Midwestern farmers - the racist, neanderthals who put Trump in office - will see major economic problems as climate change reduces harvests and endangers live stock (no doubt the red state leaches will want federal bailouts with funds derived from blue states). The report is massive and looks at the prospects for every area of the country.   Here are excerpts from the New York Times on the report:

WASHINGTON — A major scientific report issued by 13 federal agencies on Friday presents the starkest warnings to date of the consequences of climate change for the United States, predicting that if significant steps are not taken to rein in global warming, the damage will knock as much as 10 percent off the size of the American economy by century’s end.

The report, which was mandated by Congress and made public by the White House, is notable not only for the precision of its calculations and bluntness of its conclusions, but also because its findings are directly at odds with President Trump’s agenda of environmental deregulation, which he asserts will spur economic growth.

[I]n direct language, the 1,656-page assessment lays out the devastating effects of a changing climate on the economy, health and environment, including record wildfires in California, crop failures in the Midwest and crumbling infrastructure in the South. Going forward, American exports and supply chains could be disrupted, agricultural yields could fall to 1980s levels by midcentury and fire season could spread to the Southeast, the report finds.

[T]he report says, climate change could slash up to a tenth of gross domestic product by 2100, more than double the losses of the Great Recession a decade ago.

Scientists who worked on the report said it did not appear that administration officials had tried to alter or suppress its findings. However, several noted that the timing of its release, at 2 p.m. the day after Thanksgiving, appeared designed to minimize its public impact.

“This report will weaken the Trump administration’s legal case for undoing climate change regulations, and it strengthens the hands of those who go to court to fight them,” said Michael Oppenheimer, a professor of geosciences and international affairs at Princeton.

The report is the second volume of the National Climate Assessment, which the federal government is required by law to produce every four years. . . . . The results of the 2014 report helped inform the Obama administration as it wrote a set of landmark climate change regulations. The following year, the E.P.A. finalized President Barack Obama’s signature climate change policy, known as the Clean Power Plan, which aimed to slash planet-warming emissions from coal-fired power plants. At the end of the 2015, Mr. Obama played a lead role in brokering the Paris Agreement.

But in 2016, Republicans in general and Mr. Trump in particular campaigned against those regulations. . . . . . Since winning the election, his administration has moved decisively to roll back environmental regulations.

The report puts the most precise price tags to date on the cost to the United States economy of projected climate impacts: $141 billion from heat-related deaths, $118 billion from sea level rise and $32 billion from infrastructure damage by the end of the century, among others.

The authors put forth three main solutions: putting a price on greenhouse gas emissions, which usually means imposing taxes or fees on companies that release carbon dioxide into the atmosphere; establishing government regulations on how much greenhouse pollution can be emitted; and spending public money on clean-energy research.

The report covers every region of the United States and asserts that recent climate-related events are signs of things to come. No area of the country will be untouched, from the Southwest, where droughts will curb hydropower and tax already limited water supplies, to Alaska, where the loss of sea ice will cause coastal flooding and erosion and force communities to relocate, to Puerto Rico and the Virgin Islands, where saltwater will taint drinking water.

More people will die as heat waves become more common, the scientists say, and a hotter climate will also lead to more outbreaks of disease.

Two areas of impact particularly stand out: trade and agriculture.

The nation’s farm belt is likely to be among the hardest-hit regions, and farmers in particular will see their bottom lines threatened.

“Rising temperatures, extreme heat, drought, wildfire on rangelands and heavy downpours are expected to increasingly disrupt agricultural productivity in the U.S.,” the report says. “Expect increases in challenges to livestock health, declines in crop yields and quality and changes in extreme events in the United States and abroad.”

The report says the Midwest, as well as the Northeast, will also experience more flooding when it rains, like the 2011 Missouri River flood that inundated a nuclear power plant near Omaha, forcing it to shut down for years.

Other parts of the country, including much of the Southwest, will endure worsening droughts, further taxing limited groundwater supplies. Those droughts can lead to fires, a phenomenon that played out this fall in California as the most destructive wildfire in state history killed dozens of people.

The report predicts that frequent wildfires, long a plague of the Western United States, will also become more common in other regions, including the Southeast.

Posted by Michael-in-Norfolk at Saturday, November 24, 2018