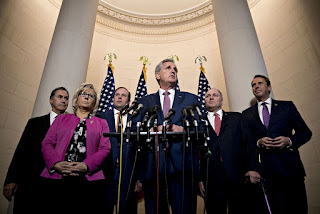 As the base of the Republican Party has become increasingly concentrated among aging whites, Christian extremists, white supremacists and vulture capitalists, something has happened to Republican women in Congress: they are vanishing.  At this time, it appears that only 13 women will be among the Republican caucus in 2019 - down by 10 from the present Congress.   To anyone sentient, the reason should be obvious: women do not like the GOP's racist, male privilege based  agenda and will vote against Republicans even when the Republican candidate is a woman.    Yet the GOP seems shocked and ponders how to regain support from women.  Jettisoning much of the current GOP platform would be an obvious choice if one is in touch with objective reality, but don't hold your breath waiting for reality to set in.  A piece in the Washington Post looks at the phenomenon.  Here are highlights:

About a half dozen House Republican women gathered this week for a somber, post-election dinner.

Exchanging thoughts about the brutal results for GOP candidates, they realized something depressing, according to one attendee. That small dinner group represented about half the total number of Republican women who would serve in the House next year.

Just 13 GOP women have won election so far to serve in the next Congress, down from 23 this year. With a half dozen races yet to be resolved, the House GOP — the minority party next year — is all but certain to have the lowest number of women in its ranks since 1994.

That drop-off came amid a national political climate that saw female voters sharply break from Republicans. Women favored Democrats over Republicans for Congress, 59 percent to 40 percent, according to exit polls.

It has set off a debate within the Republican Party about how to address this crisis, both in terms of appealing to female voters and recruiting and retaining women in Congress.
“I think the Republicans have to get off of defense on this issue,” Rep. Liz Cheney (R-Wyo.) said Friday in an interview.

Cheney was the uncontested winner this week in the race for House Republican conference chairwoman, which puts her in charge of the party’s communications and messaging strategy. She will become the party’s highest-profile woman in Congress, trying to rebuild and rebrand its battered image.

But she does not see any need for course corrections on policies relating to women, arguing that Democrats create silos for female issues that treat women in a condescending way. . . . She said that issues like security and a strong economy cut across gender lines and that if Republicans made that argument better and had more women making the pitch, they would win more support.“We need more women running for office, no doubt,” Cheney said.  Rep. Elise Stefanik (R-N.Y.) could not agree more. . . . . . “Take a look around,” she told the GOP lawmakers. “This is not reflective of the American public.”

Stefanik said she then asked Reps. Kevin McCarthy (R-Calif.) and Jim Jordan (R-Ohio), the minority leader candidates, what their plans were to recruit and elect more women.  “I was struck that I really didn’t get an answer,” she recalled in an interview Friday.

Just one new Republican woman, so far, will be sworn in for her first term in January.  Yet when Cheney and Stefanik look across the aisle next year, they will see a record number of female Democrats, at least 89.

Trump won two years ago despite more than a dozen women accusing him of improper conduct or sexual assault, charges he denies. After his win, the Democratic Party and liberal activists focused early on recruiting and advancing female candidates. The reaction to the #MeToo movement further encouraged Democratic women, culminating in the clash over sexual misconduct allegations against Supreme Court Justice Brett M. Kavanaugh and the GOP’s treatment of his accusers.

Kavanaugh denied the allegations. Trump mocked one of his accusers, .  . . Stefanik took a more nuanced view, believing that the terrible standing with women was pretty well baked before last month’s confirmation vote.  “We were having problems with women voters before that,” she said.

Cheney sees her main focus as sharpening the party’s message. She intends to do a lot more than just stand behind McCarthy, the incoming minority leader, to provide a better visual backdrop.

She wants to go after Democrats for supporting a “socialist economic policy” like single-payer insurance and how such a national health program would limit women’s medical choices. “That would be a disaster,” she said.

I'm sorry, but Cheney - a child of privilege who has ridden her parents' fame to success - is clueless on the issue of heath care access.  The more I see and with a background of doing legal work for  hospital system, single payer insurance is the only way all citizens will have equal access to adequate healthcare.
Posted by Michael-in-Norfolk at Sunday, November 18, 2018