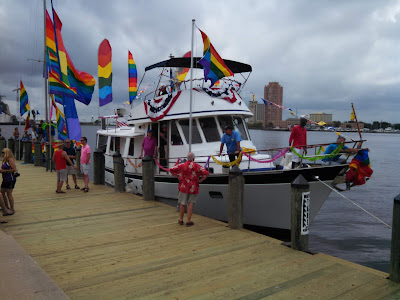 While the administration of Virginia Governor, Ralph Northam has been pressing an "all welcome" campaign and has sought to see statewide LGBT non-discrimination protections enacted - the effort died in 2018 when the legislation was killed by a small cabal of Republicans (including John Cosgrove of Chesapeake - the least LGBT friendly city in the region) - the local cities in Hampton Roads continue to score poorly on the Human Rights Campaign's yearly municipal equality index.  Every area city scored well below the national average.  The reality is that that to compete on a national and global level for the growing, progressive businesses of the future, much needs to be done if Hampton Roads is to truly be competitive.  Between the region's lack of a decent mass transit system and unwelcoming climate, it's little surprise that Amazon chose Northern Virginia - whose cities score more than 30 points higher - over Virginia Beach for its new headquarters.   While progressive compared to the reactionary backwaters of Southwest Virginia, Hampton Roads will never achieve the economic and social prominence it aspires to unless and until its cities (i) work cooperatively, and (ii) put in place laws and policies that bar discrimination.  A piece in the Virginian Pilot looks at the disheartening Equality Index scores:

How LGBTQ friendly is Hampton Roads? Not very, according to a recent report from a national nonprofit civil rights organization.

Of the seven cities that make up the region, five – Chesapeake, Hampton, Newport News, Norfolk and Virginia Beach – were included in the Human Rights Campaign's yearly municipal equality index. And all ranked below the national average.

More than 500 municipalities nationwide were scored across five categories assessing how inclusive their laws, policies and services are of people who live and work there.
According to the study, 78 cities received a perfect score – including Birmingham, Ala.; Tucson, Ariz.; and Los Angeles – and 25 percent scored higher than an 83. About 25 percent scored a 36 or lower, and 15 scored a zero.

Cities could earn up to 30 points for their nondiscrimination laws – whether discrimination on the basis of sexual orientation and gender identity is prohibited. A total of 28 points could be earned for the municipality as an employer of people and whether they offer equivalent benefits and protections, and for diversity in their workplaces.

Cities could earn up to 8 points for their commitment to pursuing equality.

On average, cities across the country scored 58 points or higher, according to the 2018 report. But across the region, scores were much lower, ranging from 29 to 50.

What Hampton Roads cities lack most, according to the report, is legislation geared toward protecting residents from discrimination in the workplace, housing and public services.

[T]he omission of gender identity and sexual orientation in anti-discrimination laws make residents vulnerable daily.  Transgender residents are the most at-risk community, she said. And if municipalities want to protect all residents, Walls-Beegle said comprehensive LGBTQ protections and public accommodation laws are needed.

As an employer of LGBTQ people, Walls-Beegle said attracting talent from out-of-state is difficult.  "Trying to get people to come work in a growing LGBTQ community – they tell me no because Virginia has no legal protections," she said.

Of the 11 Virginia cities included in the report, only one – Roanoke, which earned 12 points – scored lower than cities in southeastern Virginia.  Charlottesville earned 75 points and Alexandria tallied 82. Arlington County boasted 92 points.

While Virginia may be transitioning to being a "blue state," it still lags behind progressive states on many front.  I find the situation particularly upsetting since my son (who is straight) refuses to move back to Virginia from Washington State since he sees Virginia as backward and bigoted. Sadly, his perception is anything but unique.  I have received calls from a number of LGBT individuals who have received job offers in Virginia and who want to know the state of Virginia's non-discrimination laws.  Many turn down the job offers when they learn the would be losing the non-discrimination protections they enjoy in their current home state.

Posted by Michael-in-Norfolk at Saturday, November 24, 2018