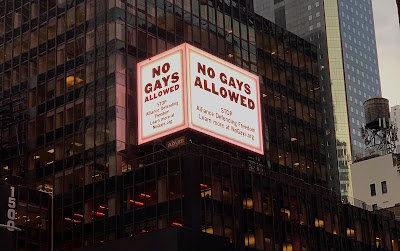 Having been involved in LGBT activism for more than 15 years, one of the things that is striking is the manner in which anti-gay hate groups masquerade under deceptive names.  They love to use names that include words like "family" - e.g. The Family Foundation based in Richmond which is virulently anti-gay, Family Research Council which is both anti-gay and lead by a man with white supremacist ties - and "freedom," although freedom translates into special rights for some and marginalization and denigration for everyone else.  Alliance Defending Freedom ("ADF") falls into this later category and relentlessly works against LGBT citizens and, if it could have its way, would turn America into a right wing Christian theocracy.   Under ADF's vision, Christofascists' rights trump those of all others and can discriminate against anyone who they hate.    Now, Citizens for Transparency is working to expose the hate-filled agenda of ADF.  Here are highlights from NBC News:

Surrounded by the skyscrapers that tower over Times Square, a new billboard went up this week that in large black letters reads: “NO GAYS ALLOWED.” Just below, a smaller message states: “STOP Alliance Defending Freedom. Learn more at NoGays.org.”

The billboard is part of a new campaign that aims to draw attention to the conservative Christian legal group Alliance Defending Freedom, or ADF, which has been labeled an anti-LGBTQ “hate group” by the Southern Poverty Law Center . . . . Since its founding nearly 25 years ago, ADF has been linked to efforts seeking to criminalize homosexuality, restrict transgender people’s access to sex-segregated facilities and permit businesses to deny service to LGBTQ people.

Caleb Cade, a spokesman for Citizens for Transparency, the advocacy group behind the campaign, said the powerful nonprofit law group has fought for years to undermine lesbian, gay, bisexual, transgender and queer rights, often behind the scenes.

“We want to remind people that there are still really insidious forces at work against our community,” Cade told NBC News. “ADF has been leading that war for a long time, with tens of millions of dollars to do it.”

The Times Square billboard, which went up Tuesday and is expected to remain through February, directs viewers to the campaign’s website, which provides information about ADF’s past works and links to news articles about its efforts to “make LGBT people second-class citizens.”

ADF was founded in 1994 by a group of influential Christian leaders, including Alan Sears, co-author of the 2003 book "The Homosexual Agenda: Exposing the Principal Threat to Religious Freedom Today,” and James Dobson, founder of Focus on the Family and author of the 2004 book “Marriage Under Fire,” which claimed same-sex marriage would “destroy the fundamental principles of marriage, parenthood and gender.”

Heidi Beirich, director of the Southern Poverty Law Center’s Intelligence Project, said her organization first became aware of ADF in 2013, when it discovered the nonprofit was advising anti-LGBTQ organizations overseas — in places including Belize and Jamaica — on how to keep anti-sodomy laws on their books.

Their efforts to criminalize same-sex sexual activity, however, go back much further than 2013. In the landmark Supreme Court case Lawrence v. Texas, which struck down the remaining anti-sodomy laws in the U.S., ADF (then known as the Alliance Defense Fund) submitted a friend of the court brief in support of keeping the laws on the books.ADF also contributed to friend of the court briefs against expanding gay rights in other landmark Supreme Court cases, including same-sex marriage cases Obergefell v. Hodges and United States v. Windsor.

“The majority of their work lately,” according to Beirich, “has revolved around religious freedom cases to basically allow certain businesses not to have to serve the LGBTQ population.”

In a case filed last week, ADF is representing a professor who is suing officials at his small public university in Ohio after receiving a warning for violating its nondiscrimination policy by not addressing a transgender student by her preferred gender terms.

In what could be another high-profile case, ADF is urging the Supreme Court to consider a case out of Michigan in which a funeral home fired a transgender employee due to the owner’s religious beliefs. The 6th U.S. Circuit of Appeals sided with the worker, ruling that Title VII of the Civil Rights Act of 1964 protects transgender workers. The funeral home appealed.

ADF has also been linked to so-called transgender bathroom bills that have been introduced in recent years in state legislatures across the U.S. aimed at restricting trans people’s access to sex-segregated facilities.

According to an in-depth NBC News report published in April 2017, many of these “bathroom bills” filed across multiple states resemble one another — and that’s because they used language strongly similar to the model legislation called the Student Physical Privacy Act, which was drafted by ADF.

ADF operates on a budget of over $50 million, according to the Human Rights Campaign, a national LGBTQ rights group. Like any 501c3 nonprofit, ADF is not required to disclose its donors, and many of its 3,200 allied attorneys do not publicize the pro bono work they do on behalf of the organization, which makes the group’s efforts difficult to track, according to Beirich.

Beirich said many people don’t realize the influence the ADF wields. “People just don’t know. They don’t understand that this is the legal arm of the social conservative movement,” she explained.

A review of ADF can be found here on the Southern Poverty Law Center website.
Posted by Michael-in-Norfolk at Sunday, November 18, 2018