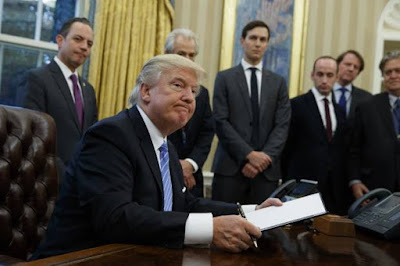 America is one of the few advanced nations in the world where the ruling class now in office view the poor, the low income elderly and the sick as little better than disposable garbage. Now, programs that were already inadequate will likely be slashed further and people will literally dies, yet this is what "family values" Republicans and their evangelical Christian supporters want. This mindset is one of the principal reasons I have walked away for Christianity - its loudest adherents are simply foul and horrible human beings.  A piece in Salon looks at the coming slash and burn approach that Trump, a/k/a Der Fuhrer is poised to unleash on Medicaid.  Having been through a hellish experience seeking placement of the husband's intellectually disabled adopted brother, one has to wonder how people like him will fare under the Trump/GOP agenda.  Will they ultimately simply euthanize such people?  That was the Nazi solution after all and Trump certainly seems to want to go down the road to fascism.  Here are article excerpts:

For all his posturing on populism and sticking up for the “forgotten men and women” of the United States, President Trump is no friend to low-income Americans. In the first days of his administration, he has lined up some policies that, if implemented, are likely to measurably worsen the lives of poor people in this country. Chief among them thus far is his plan for Medicaid, which will be hacked up, shriveled, and left to rot if the new president has his way.

Trump campaigned, somewhat perversely, as a champion of social programs — largely meaning Social Security and Medicare — but Medicaid has long been a target of his. Kellyanne Conway, a senior adviser to the president, confirmed over the weekend that Trump’s plan for the health care system after he tears apart the Affordable Care Act (and its expansion of Medicaid coverage) is to change the Medicaid funding structure.

There is a rationale for this, of sorts. As Conway put it, switching to block grants instead of direct federal management will make sure that “those who are closest to the people in need” will run the program.

This need for “flexibility” and “efficiency” has long been the core argument for block grants. But states already have a good deal of flexibility when it comes to Medicaid — what populations and procedures to cover and what eligibility thresholds to observe are all determined (to varying degrees) by state governments. The added “flexibility” that would come with block-granting the program can mean a lot of things, but it’s generally presumed to mean more stringent means-testing, forcing recipients to pay premiums for their care, reducing benefits, and other barriers to eligibility.

Changing the funding structure to block grants means that Medicaid will become less about providing access to health care and more about finding ways to manage costs. “Because a Medicaid block grant is explicitly intended to produce significant federal budgetary savings,” the Center for Budget and Policy Priorities notes, “block grants are designed in ways that give states considerably less federal funding each year than they would receive under the current financing system.”

Block grants would reduce the number of people enrolled in Medicaid, but it would do so without servicing the ongoing health care needs of those people who are kicked off the rolls.

The inevitable end result of this will be that more low-income people are unable to gain access to health care. And when we’re talking about Medicaid beneficiaries, we’re talking mainly about kids, the disabled and the elderly, who together make up 64 percent of total Medicaid enrollees and account for 77 percent of Medicaid spending. Those are the people who will suffer the most from Trump’s plan to save money under Medicaid by giving state governments both means and incentive to kick needy people off the program.

The irony is that many aging working class whites who voted for Trump may in the near future find themselves unable to secure needed assisted living or nursing home accommodations since the Medicaid funding that would have assisted them will have been cut.  Perhaps I am callous, but a part of me says it will serve them right.
Posted by Michael-in-Norfolk at Tuesday, January 24, 2017