Will the GOP Save Us From the Trump Monster? 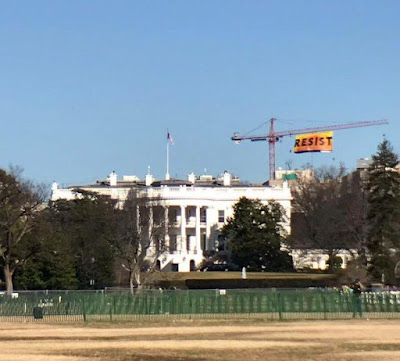 Personally, I gave up on the Republican Party many years ago when I resigned from the party when it became clear to me that the GOP could no longer grasp or respect the concept of the separation of Church and state.  In the intervening years, the GOP has gone form ugly to downright hideous and grotesque.  Racism, white supremacy, religious extremism and contempt for objective facts and science are now the GOP norm.  It was a very different party in the days of my parents and grandparents. Now, with the election of Donald Trump as the Republican president of this once great nation, the GOP has reached a new low.  Lying and "alternate facts" pass for integrity and and honesty.  Thus, the question becomes that of who will save America from the Frankenstein monster it has unleashed?  I myself put almost zero faith in the willingness or ability of the GOP to redeem itself and save the nation.  I think that new popular forces and  new political approaches are all that stand between America and fascism or Trumpism, things that are not all that different.  Yet a column in the Washington Post calls of the GOP to rise to the occasion.  I will not hold my breath, but here are column excerpts:

What we know so far is that the man is who he is. There is no larger, finer man inside him trying to get out. Everyone who is paying attention knows this. Flags flying at the Capitol, the U.S. Marine Band, gray eminences in black coats, and He Who Is Smarter Than Those With Intelligence delivers 16 minutes of hooey and horse hockey about corrupt politicians betraying the people, and American carnage, and patriotism healing our division, though the division is mainly about Himself and though love of country does not necessarily make people stupid.

There might as well have been a 14-year-old boy at the lectern  . . . . The next day he motored out to the CIA and stood before the memorial wall honoring heroes who gave their lives in anonymity and he bitched about his newspaper coverage. The next day he boasted that his inauguration’s TV ratings were higher than those in 2013. The day after that, he told the congressional leadership that he lost the popular vote because millions of illegal votes were cast, which everyone in the room knew was a bald-faced lie, except perhaps Himself. The man is clueless, tightly locked inside his own small bubble. A sizable minority of Americans, longing for greatness or wanting to smack down an ambitious woman and to show those people in the hellhole coastal cities what the real America is all about, has elected him. To him, this minority is a mass movement such as the world has never seen. God have mercy.

Everyone knows that the man is a fabulator, oblivious, trapped in his own terrible needs. Republican, Democrat, libertarian, socialist, white supremacist or sebaceous cyst — everyone knows it. It is up to Republicans to save the country from this man. They elected him, and it is their duty to tie a rope around his ankle. They formed a solid bloc against President Obama and held their ranks, and now, for revenge, they will go after health insurance subsidies for people of limited means, which is one of the cruelest things they can possibly do. . . . . when upward of 30 million are left high and dry, people will suffer horribly.

The question is: How cynical are we willing to be and for how long? How long will Senate Republicans wait until a few of them stand up to the man? Greatness is in the eye of the beholder. American self-respect is what is at stake here, ladies and gentlemen. The only good things to come out of that inauguration were the marches all over the country the day after, millions of people taking to the streets of their own free will . . . . That’s the great America I grew up in. It’s still here.

Posted by Michael-in-Norfolk at Thursday, January 26, 2017

Email ThisBlogThis!Share to TwitterShare to FacebookShare to Pinterest
Labels: decline of the GOP, Frankenstein monster, idiocy of the GOP base, mentally ill, narcissistic and unprincipled, unhinged