Trump's Fact Free World and Why It Matters 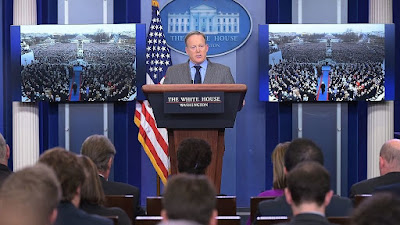 Frighteningly, we are already seeing evidence where Trump, a/k/a Der Fuhrer, lives in a fact free fantasy world where objective reality and empirical facts simply do not matter.  Worse yet, he wants the rest of us to inhabit the same bizarre world that only serves to satiate his ego and narcissism. Something as simple as the size of the inauguration crowd on January 20, 2017, is open to debate - at least in Der Fuhrer's mind.  By all reports and based on countless photos, transit system numbers and other provable measures, Trump had a lousy turn out for his inauguration yet the man boasts that it was the largest turn out ever.  His claim, like most of what Trump says, is an outright lie.  To admit the reality that he is NOT liked and NOT popular with a majority of Americans is impossible for a narcissist like Trump.  Meanwhile, unprecedented numbers of protesters turned out yesterday in Washington, DC, that dwarfed the inaugural turn out. What is most frightening is the fact that this rejection of fact and reality will spill over into everything this dangerous sociopath does while in office.  A piece in NPR looks at the lies being put out by Der Fuhrer's henchmen.  Here are highlights:

The Trump Administration spent its first full day in office taking shots at the media and arguing about crowd sizes at Friday's inauguration.

Press Secretary Sean Spicer delivered a fiery broadside against the Fourth Estate from the White House Briefing Room Saturday evening, claiming that reporters had engaged in "deliberately false reporting" in the past 24 hours since President Trump took the oath of office. And, after berating the press, he walked away without taking any questions.

He blamed new floor coverings on mall areas that "had the effect of highlighting any areas where people were not standing, while in years past the grass eliminated this visual." And Spicer claimed that fences and magnetometers going further back than ever prevented "hundreds of thousands of people from being able to access the mall as quickly as they had in years past." However, CNN reporter Ashley Killough tweeted out a photo showing that floor coverings had in fact been used at Obama's second inauguration.

Why dispute something that people could see with their own eyes?  It all plays into the insanity of the occupant of the White House and his effort to discredit the media which will otherwise try to hold him accountable and expose the endless tide of lies that we can expect going forward.  An activist friend shared some thoughts on Facebook that seem to describe the coming disinformation campaign:


If you are puzzled by the bizarre "press conference" put on by the White House press secretary this evening (angrily claiming that Trump's inauguration had the largest audience in history, accusing them of faking photos and lying about attendance), let me help explain it. This spectacle served three purposes:

1. Establishing a norm with the press: they will be told things that are obviously wrong and they will have no opportunity to ask questions. That way, they will be grateful if they get anything more at any press conference. This is the PR equivalent of "negging," the odious pick-up practice of a particular kind of horrible man (e.g., Donald Trump).

2. Increasing the separation between Trump's base (1/3 of the population) from everybody else (the remaining 2/3). By being told something that is obviously wrong—that there is no evidence for and all evidence against, that anybody with eyes can see is wrong—they are forced to pick whether they are going to believe Trump or their lying eyes. The gamble here—likely to pay off—is that they will believe Trump. This means that they will regard media outlets that report the truth as "fake news" (because otherwise they'd be forced to confront their cognitive dissonance.)

3. Creating a sense of uncertainty about whether facts are knowable, among a certain chunk of the population (which is a taking a page from the Kremlin, for whom this is their preferred disinformation tactic). A third of the population will say "clearly the White House is lying," a third will say "if Trump says it, it must be true," and the remaining third will say "gosh, I guess this is unknowable." The idea isn't to convince these people of untrue things, it's to fatigue them, so that they will stay out of the political process entirely, regarding the truth as just too difficult to determine.

This is laying important groundwork for the months ahead. If Trump's White House is willing to lie about something as obviously, unquestionably fake as this, just imagine what else they'll lie about. In particular, things that the public cannot possibly verify the truth of. It's gonna get real bad.

A piece in Vox elaborates further on this effort:


Delegitimizing the institutions that might report inconvenient or damaging facts about the president is strategic for an administration that has made a slew of impossible promises and takes office amid a cloud of ethics concerns and potential scandals.

It also gives the new administration a convenient scapegoat for their continued struggles with public opinion, and their potential future struggles with reality. This kind of “dishonesty from the media,” Spicer said, is making it hard “to bring our country together.” It’s not difficult to imagine the Trump administration disputing bad jobs numbers in the future, or claiming their Obamacare replacement covers everyone when it actually throws millions off insurance.

Be very, very afraid for the future.
Posted by Michael-in-Norfolk at Sunday, January 22, 2017