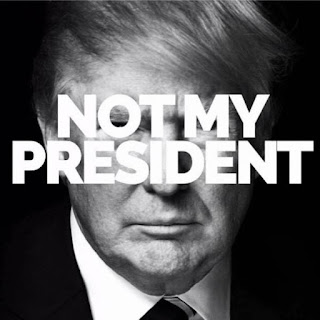 It is increasingly difficult to keep up with the lies and utter misogyny spewing forth from Der Fuhrer. Sadly, much of the media is still allowing itself to be used by Trump to distract the public from the harmful and regressive policies that his narcissistic majesty is unleashing.  His latest attempt to dupe the white supremacists and low information voters - read cretins - that comprise much of his base  is to announce that he will build a $15 billion wall along the Mexico/U.S. border and "make Mexico pay for it" by imposing a 20% import tax on goods imported into America from Mexico.  Even a Economics 101 course would predict the actual outcome: higher prices for American consumers and businesses. Trump obviously believes that his base of support is too stupid to figure out this basic economic reality.  The Dallas Morning News is having none of the lie and is correctly calling Der Fuhrer for his duplicity.  Here are some article highlights:

The White House floated the idea Thursday of imposing a 20 percent tax on Mexican imports, arguing that would be more than enough to pay for a controversial border wall — then quickly downplayed the idea as one of many under consideration.

Such a tariff on goods and services would be paid by U.S. consumers and businesses — people buying anything from avocados and tequila to automobiles. Energy companies, big retailers and other major business interests oppose such an import tax, arguing that it would drive up prices in the United States, curb demand, and erode profits.

On its face, that doesn't appear to fulfill President Donald Trump's oft-repeated vow to force Mexico to pay for the barrier, which Mexican leaders have made clear they don't want and certainly won't agree to pay for.

If anything, it's a tacit admission that the Trump administration can't cajole or coerce Mexico into paying for the project, at least in the near term.

Texas imported $84 billion from Mexico in 2015. With a 20 percent tariff, Texas businesses and consumers would have paid an extra $16.8 billion for the same goods and services. . . . a tariff that high would drastically suppress trade in both directions, and have other repercussions.

"The notion that a Mexican tariff of 20 percent represents the Mexicans paying for the wall is a flawed understanding of how tariffs work," said David French, a senior vice president at the National Retail Federation. "That would be a huge increase on prices paid by U.S. consumers."

Alfredo Duarte, president and co-founder of Dallas-based Taxco Produce Inc., said the proposed import tax will hurt American consumers more than anyone - especially anyone with a year-round appetite for tomatoes and avocados.

"We don't produce any vegetables here in the states" during the winter, he said. "We have to import vegetables. If people are still wanting to eat guacamole on Super Bowl day, we'll just go back to the time when we were paying $80 a case for avocados from California about 15 years ago." . . . He added that many large scale avocado and tomato growers in Mexico are owned by American companies.

"Trump is taking a shot at our jobs," warned Texas Democratic Party executive director Crystal Perkins. "Texas' working families and our economy depend on a strong relationship with Mexico. Minority President Donald Trump's 20-percent tax will kill Texas jobs, raise the price of goods for Texas families, and slaughter Texas' relationship with its largest trading partner."

Everyday I find it more difficult to see Trump as anything other than a dangerous, lying pile of human excrement. That 81% of evangelical Christians voted for him says all one deeds to know about the moral bankruptcy of the "godly folk."
Posted by Michael-in-Norfolk at Friday, January 27, 2017