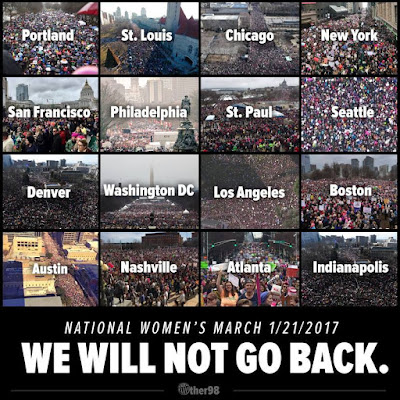 Still smarting from the low attendance turnout for his coronation inauguration, Der Fuhrer attacked those who participated in yesterday's Women's March.  The New York Daily News noted as follows:

Trump, on his second full day in office, criticized the efforts of participants in Saturday’s Women’s March held in Washington, D.C.

“Watched protests yesterday but was under the impression that we just had an election!” Trump wrote on Twitter Sunday. “Why didn't these people vote? Celebs hurt cause badly.”

The White House – after remaining silent on the topic Saturday – released a statement earlier Sunday addressing the march, bemoaning the lack of attention surrounding the anti-abortion March for Life scheduled for Friday, Jan. 27.


A column in the Washington Post looks at the march and more importantly why the momentum must continue to fight and oppose every effort of Der Fuhrer and Congressional Republicans to roll back time and eliminate civil rights.  Here are excerpts:


Some descended on Washington’s Mall very early, and some joined later. Some stood in long lines outside Metro stations to get downtown. Others walked a long way.

The signs were almost all homemade. Many were clever, channeling humor and whimsy (“There will be hell toupee,” “Things are so bad even introverts have to protest”), as well as anger, determination and commitment.

And the crowd got so big that it broke into tributaries, marching in different directions. The tributaries eventually joined up to form a mighty stream of protest. No matter how much President Trump and his administration try to lie and spin, every objective indication is that far more people showed up to register dissent over his rise to power than to celebrate it.

It was a diverse crowd in many ways, more white than African American and Latino but with a fair representation across racial lines. It tilted young but included many among the middle-aged and the senior set.

For many, it was a multi-generational day, a family affair: grandparents, parents and children, some in strollers. Women predominated, but a large minority was male, and a fair number of men carried signs suggesting, in various formulations, that real men, good men, supported the rights of their sisters and wives and mothers.

[I]t was at least as much a message to Trump and to the country: Less than 24 hours after the new president took the oath of office, hundreds of thousands of Americans came together to say that they would not stand by in silence if the new administration threatened basic freedoms or the advances of the past eight years, and the last 50.

The message of the Washington March was echoed by large crowds that gathered in cities and towns across the country. In their different ways, the marchers were saying that they would not be cowed into silence or demobilized into a sullen difference.

The anger and dismay over Trump was a dominant emotion, and judging by the signs, its sources were multiple: his attitude and behavior toward women especially, given the theme of the day, but also Russia’s role in the election and Trump’s bromance with Vladimir Putin.

There were loud calls for the defense of free speech and freedom generally. If Trump didn’t talk about freedom in his inaugural address, this crowd picked up the slack.

There was an acceptance of the reality that Trump is president but a stout rejection of who he is and what he stands for. That included expressions of a desire to drive him from office, with the inevitable breakout of “Hey hey, ho ho, Donald Trump has got to go” chants.

The politics of the next few months and years will depend a great deal on whether the energy displayed on Saturday is sustained through the hard work of political activism. I can imagine skeptics reading this and saying one day of protests will be very easy for Trump and the Republican Party to absorb (even if one can imagine Trump’s fury at not getting even a day’s peace).

But there is reason to believe this was not a one-off. First, there was not a single march in Washington but demonstrations all over the country. As the tea party showed, change comes from local actions coordinated nationally. There is clearly a large national base of opposition, community by community.

Third, the march here (and such evidence I have seen suggests this was true elsewhere) was strikingly nonsectarian. There were not people pushing very narrow ideological agendas or political subgroups insisting that they and only they had, in old left parlance, “the right line” on the future. Different parts of the anti-Trump coalition were generally happy to reinforce one another’s messages.

Finally, Trump’s election jarred many progressives and moderates from quiescence. If these marches were for women and against Trump, they were also marches against complacency. That may have been their most important message.


What I have found encouraging is that so many people I know who have not been political activists in the past turned out in March, including one of my sisters and both of my daughters.   The momentum must continue and Trump must be driven from office.
Posted by Michael-in-Norfolk at Sunday, January 22, 2017