Trump Voters: In Some Cases, Thoughtful, Smart, and Terrifying 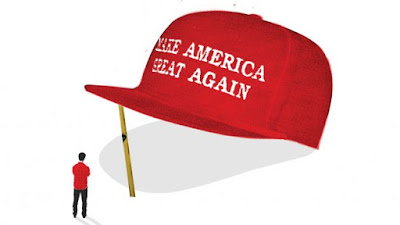 My blogger/activist friend Lane Hudson who I first met at the LGBT Blogger Summit in Washington, DC, in December, 2008, shared a piece at Mother Jones that lays out the challenge progressives - and I would argue, true Christians to the extent the concept has not been completely destroyed by the Christofascists - face in confronting many Trump/GOP supporters.  The young man, Peter, that is the focus of the article is not a knee jerk racist.  Yet he seems incapable of questioning his own distorted view of objective reality and, like many areas that strongly supported Trump, the area that he comes from has things far better than many parts of America.  And it is noteworthy that when faced with a changing world and society, rather than adapt, Peter and his cohorts blindly close their minds and cling to their "identity" - i.e., white, heterosexual conservative Christian.  Here in Virginia, rural areas like the one that Peter is from are in a downward spiral but they refuse to see that it is their own closed mindedness and reactionary beliefs that make them so unpalatable to new progressive businesses. Meanwhile, the youth with ambition leave the area for progressive cities. I am at a loss as to how to get through to such people.  Here are some article highlights:

This past October, I taught a week long seminar on the history of conservatism to honors students from around the state of Oklahoma. In five long days, my nine very engaged students and I got to know each other fairly well. Six were African American women. Then there was a middle-aged white single mother, a white kid who looked like any other corn-fed Oklahoma boy and identified himself as "queer," and the one straight white male. I'll call him Peter.

Peter is 21 and comes from a town of about 3,000 souls. It's 85 percent white, according to the 2010 census, and 1.2 percent African American—which would make for about 34 black folks. "Most people live around the poverty line," Peter told the class, and hunting is as much a sport as a way to put food on the table. Peter was one of the brightest students in the class, and certainly the sweetest.

Still, Peter's thinking might help us frame a central debate on the left about what to make of Trump's victor.y Is it, in the main, a recrudescence of bigotry on American soil—a reactionary scream against a nation less white by the year? Or is it more properly understood as an economically grounded response to the privations that neoliberalism has wracked upon the heartland?

Peter knows where he stands. He remembers multiple factories and small businesses "shutting down or laying off. Next thing you know, half of downtown" in the bigger city eight miles away "became vacant storefronts." Given that experience, he has concluded, "for those people who have no political voice and come from states that do not matter, the best thing they can do is try to send in a wrecking ball to disrupt the system."

According to the 2010 census, the median household income in Peter's county is a little more than $45,000. By comparison, Detroit's is about $27,000 and Chicago's (with a higher cost of living) is just under $49,000. The poverty rate is 17.5 percent in the county and 7.6 percent in Peter's little town, compared with Chicago's 22.7 percent. The unemployment rate has hovered around 4 percent.

The town isn't rich, to be sure. But it's also not on the "bottom." Oklahoma on the whole has been rather dynamic economically: Real GDP growth was 2.8 percent in 2014—down from 4.3 percent in 2013, but well above the 2.2 percent nationally. The same was true of other Trump bastions like Texas (5.2 percent growth) and West Virginia (5.1 percent).

Peter, though, perceives the region's economic history as a simple tale of desolation and disappointment. . . . . He was just calling it like he saw it. But it's striking how much a bright, inquisitive, public-spirited guy can take for granted that just is not so.

But while Peter's analysis is at odds with much of the data, his overall story does fit a national pattern. Trump voters report experiencing greater-than-average levels of economic anxiety, even though they tend have better-than-average incomes. And they are inclined to blame economic instability on the federal government—even, sometimes, when it flows from private corporations.

Feelings can't be fact-checked, and in the end, feelings were what Peter's eloquent essay came down to­—what it feels like to belong, and what it feels like to be culturally dispossessed. "After continually losing on the economic side," he wrote, "one of the few things that you can retain is your identity. What it means, to you, to be an American, your somewhat self-sufficient and isolated way of life, and your Christian faith and values. Your identity and heritage is the very last thing you can cling to...Abortion laws and gay marriage are the two most recent upsets.

I did notice a line in his essay that I had glided over during my first two readings, maybe because I liked him too much to want to be scared by him. "One need only look to the Civil War and the lasting legacies of Reconstruction through to today's current racism and race issues to see what happens when the federal government forces its morals on dissenting parts of the country."

He first objected (politely!) to what he saw as the damning implication behind my observation. Slavery and Reconstruction? "I was using it as an example of government intrusion and how violent and negative the results can be when the government tries to tell people how to think. I take it you saw it in terms of race in politics. The way we look at the same thing shows how big the difference is between our two groups."

To him, focusing on race was "an attention-grabbing tool that politicians use to their advantage," one that "really just annoys and angers conservatives more than anything, because it is usually a straw man attack."  I wanted to meet him halfway, until he started talking about history.

"The reason I used the Civil War and Reconstruction is because it isn't a secret that Reconstruction failed," Peter wrote. "It failed and left the South in an extreme poverty that it still hasn't recovered from." And besides, "slavery was expensive and the Industrial Revolution was about to happen. Maybe if there had been no war, slavery would have faded peacefully."

As a historian, I found this remarkable, since it was precisely what all American schoolchildren learned about slavery and Reconstruction for much of the 20th century. Or rather, they did until the civil rights era, when serious scholarship dismantled this narrative, piece by piece. But not, apparently, in Peter's world.

This was where he left me plumb at a loss. Liberals must listen to and understand Trump supporters. But what you end up understanding from even the sweetest among them still might chill you to the bone.

As noted at the outset, how does one deal with those who cannot or will not look at objective facts and objective reality?   I often tell my clients that they need to choose between logic and reason on the one hand and emotion and feeling on the other.  Far to many Trump voters followed their emotions and sense of growing isolation (largely as a result of their own closed mindedness).  How do you reason with those who care little for real facts and objective data?  I do not know the answer.
Posted by Michael-in-Norfolk at Tuesday, January 24, 2017