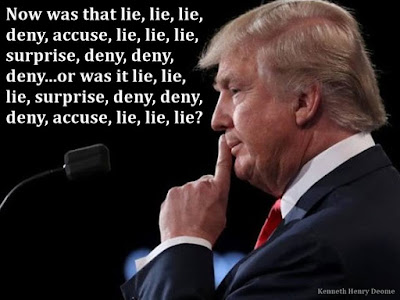 Given Trump/Der Fuhrer and his administrations clear indications that lying -or "alternate facts per Kellyanne "Goebbels" Conway - will be the new norm, the media needs to adjust how it operates so as to insure that they are not complicit in spreading falsehoods.  CNN may have hit upon how to proceed going forward: never broadcast press conferences or Trump speeches live.  Instead, record them, fact check them, and if they are full of lies, simply do not broadcast them. Go instead with an edited version that deletes the lies although that could mean not airing the pieces at all.  Variety looks at what CC did and how the press needs to change its mode of operating when confronted with a pathological liar and his propaganda agents.  Here are excerpts:

CNN this evening declined to air live a press conference with the nation’s new White House Press Secretary, pointing to a growing rift between the embryonic Trump administration and the press corps that covers it and undermining the credibility of Sean Spicer, a longtime Republican operative who has become the new spokesman for President Donald Trump.

Producers at the cable-news outlet, owned by Time Warner, this evening decided to see what was said at the press event, according to a person familiar with the network, then play relevant parts as deemed necessary. Despite a robust amount of evidence to the contrary, Spicer during the conference insisted that Trump’s inauguration Friday drew “the largest audience to witness an inauguration, period.” The statement is a deliberate falsehood: TV ratings data issued Saturday by Nielsen show that fewer people watched Trump’s swearing-in than President Obama’s inauguration in 2009. What’s more, photos of Friday’s crowds showed that a smaller number of people had come out to Washington, D.C.’s Mall to take part. Data from the Washington Area Metropolitan Transit Authority also suggested fewer people were attending the inauguration than in years past.

Now, at a time when TV-news outlets have seen their ratings thrive thanks coverage of the colorful and fiery politician, CNN’s decision could be a momentous one: Trump and his representatives have been known to obfuscate and lie. CNN’s refusal to take the live feed suggests executives there are reluctant to put false statements on air, and, what’s more, do not think the new White House press representative is entirely credible.

“CNN’s decision to not air the press conference live illustrates a recognition that the role of the press must be different under Trump. When the White House holds press briefings to promote demonstrably false information and refuses to take questions, then press ‘access’ becomes meaningless at best and complicit at worst,” said Danna Young, an associate professor at the University of Delaware who studies politics and the media. “Democracy works best when journalists have access to the executive branch, of course. But that holds true if and only if that access leads to verifiable, accurate information. The decision on behalf of CNN to wait and verify before airing it live suggests that the media are adapting quickly to this new era.”

CNN has not established a policy about airing White House press conferences live, the person familiar with the matter said, preferring instead to make editorial decisions as circumstances demand. And it was not immediately clear Saturday evening whether its decision might prompt other news outlets to do the same. Spokespersons for CBS News, NBC News and MSNBC were not able to offer an immediate response.