Experts in Authoritarianism: Worried About Trump and GOP Failure to Rein Him In 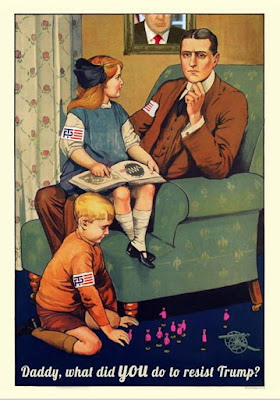 While I have "friends" who voted for Trump and the GOP who refuse to open their eyes to Trump's troubling behavior and authoritarianism, political scientists and experts on authoritarian regimes of the past are having no difficulty in recognizing warning signs from Trump - and the GOP as well since that party now seems only too willing to close its eyes to violations of the U.S. Constitution so long as the party's extreme reverse Robin Hood policies can be rammed through.  One piece in Think Progress looks at the warning signs already on display and suggests that the time to organize is NOW.  Another in The New Republic looks at the sinister agenda behind Trump's and his sycophants continuous lies.  Here are excerpts from the Think Progress piece:

President Donald Trump has only had a few days to govern so far.  In that time, he staged a press conference where his press secretary blatantly lied to the media, told the National Park Service not to tweet, and met with an American intelligence agency in an “uncomfortable” meeting. One of his senior advisers introduced the worrying concept that the Trump administration’s lies will be considered “alternative facts.”

ThinkProgress surveyed a group of political theorists and scholars of authoritarianism and asked them to evaluate the new president. Trump is already trying to rule in the style of a populist authoritarian, they said.

“It’s one thing to bash journalists but when you start talking about facts not being facts, and bar people from access to information, major red flags are going up,” said Berman.

“There is no doubt he is an authoritarian, which is completely logical because he has always worked in a structure in which he has absolute power and to me that is clear in his understanding that he sees politics as a business,” said Cas Mudde, an associate professor at the University of Georgia. “He sees democracy as ‘I have won, so I can do whatever I want or whatever I think is best for the country and I’m allowed to do that because I’m the CEO of America, Inc.’”

Trump has exhibited certain personality traits shared by authoritarian rulers, including a tendency toward nepotism, a fragile ego, and an unwillingness to gracefully accept criticism. But he will have a hard time consolidating power, so long as there remains political opposition, a free press, and checks and balances in government. Experts in authoritarianism said his movement also lacks the organization that would allow it to fully supplant existing institutions.

Totalitarian regimes of the past, like Communists in the Soviet Union or the Nazis in Germany, rose to power after incredible organization and could call upon hundreds of thousands of members. Despite already having an intricate structure in place, “even they achieved a totalitarian regime after a long time,” Mudde said.  “While I worry about autocratic tendencies, I don’t see ideology or structure for anything that is comparable to fascism.”

But there are certain moves Trump could make that would suggest a line had been crossed. “If he started passing laws or trying to use his influence to hinder CNN’s ability to report or broadcast [that would cross a line],” Berman said.

Other triggers would include using the government to “pass laws that impinge on certain citizens of ethnic or religious backgrounds,” said Berman. “Characteristics that are not just un-American, but antithetical to precepts of liberal democracy.”

Vigilance is important going forward, as Trump’s ascension to the presidency shows that a considerable portion of Republicans accepted the more radical aspects of his candidacy.
The toleration, or in some cases radicalization, of the GOP establishment is more threatening than Trump’s presidency on its own, said Ben-Ghiat.

“Formally, we have checks and balances. I’m of the school that those things are not going to stop him,” Ben-Ghiat said. “We put all the blame on Trump but the GOP has seen in him a kind of vehicle to get certain radical things they want done and [to push] a certain cultural shift in the nation.”

“The only thing between Trump and autocratic and illiberal democratic rule might be the GOP and I’m not sure how much that is going to do for us,” Mudde said. “I don’t think there is reason to panic. There is reason to organize.”

As noted, The New Republic looks at the rationale behind the incessant lies flowing from the mouth of Trump and his morally bankrupt surrogates.  Here are highlights:

The purpose of the Trump administration’s lies is not necessarily to deceive, but to separate the believers from the disbelievers—for the purpose of rewarding the former and punishing the latter. As chess champion Garry Kasparov, an expert in authoritarianism as an outspoken opponent of Russian President Vladimir Putin, tweeted on Saturday: Obvious lies serve a purpose for an administration. They watch who challenges them and who loyally repeats them. The people must watch, too.

[T]he Trump administration can blatantly lie, knowing that his base trusts him more than the “dishonest media.” And that’s exactly what Trump did in his CIA speech, which was rife with deceptions and examples of a narcissistic will to reshape the truth.  . . . . the president went on a tangent about Time.
“I have been on their cover, like, 14 or 15 times,” he said. “I think we have the all-time record in the history of Time magazine. . . . . . (The all-time record is held by Richard Nixon, who appeared on 55 Time covers.)Aside from these lies and factual mistakes, Trump’s speech was genuinely weird on a number of a counts. His intended purpose was to mend fences with the agency, with which he’s feuded over their conclusion that Russia interfered in the election to help him defeat Hillary Clinton. Yet he did very little to reassure CIA staff, only briefly acknowledging their sacrifice and service by alluding to a wall commemorating agents who died in line of duty.

Rather, Trump was in full campaign mode, attacking the media (“among the most dishonest human beings on Earth”) and praising himself (“they say, ‘is Donald Trump an intellectual?’ Trust me, I’m like a smart person”). He also indicated the U.S. might reinvade Iraq for imperial plunder. While Trump’s antics might have impressed his fans watching from home, they seem to have done little to assuage worries in the agency. The New Yorker interviewed a variety of intelligence experts, including John MacGaffin, a high-ranking veteran of the agency. “What self-centered, irrational decision process got him to this travesty?” MacGaffin told the magazine. “Most importantly, how will that process serve us when the issues he must address are dangerous and incredibly complex? This is scary stuff!” Trump’s self-centered decision process is authoritarianism, and it’s anything but irrational. He campaigned in an authoritarian style, with rallies where he riled up large crowds to jeer at the press and protesters. One of the defining tactics of his campaign was disinformation, coupled with accusations of the same against the media. That hasn’t changed now that Trump is president.  The president will wage a rhetorical war against the media, with the intent of delegitimizing one of the few institutions that can hold him accountable, and he will wage it with his most effective weapon: Lies, damned lies, and false statistics.

Adolph Hitler and the Nazi regime employed similar tactics yet my "friends" see no cause for alarm. Sadly, I suspect they'd have made great guards at Nazi death camps given their willingness to believe and appeals to hate and bigotry.

Posted by Michael-in-Norfolk at Wednesday, January 25, 2017