'Alternative Facts': The Needless Lies of the Trump Administration 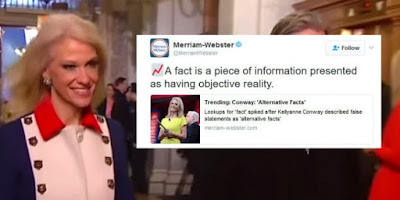 It seems that with every passing minute we are increasingly discovering that in Trump world, the "truth" is whatever Der Fuhrer wants it to be.  Never mind that it is demonstrably false.  Hence the new double speak of "alternate facts" as espoused by Kellyanne Conway who seemingly is striving to make Nazi propagandist Joseph Goebbels look like a pillar of honesty in comparison. The take away form all the lies: do not believe ANYTHING that is said by Trump or his propagandists.  If they lie about small things easily shown to be lies, why believe them on anything?  A piece in The Atlantic looks at the Orwellian world of Trump/Pence.  Here are highlights:

One of the many things that is remarkable about the Trump administration is its devotion, even in its first days, to a particular variety of pointless falsehood.

Mendacity among politicians and the spokespeople hired to spin for them runs across eras and aisles, though it is true that some are more honest than others, and Donald Trump was a historically dishonest presidential candidate. But the Trump administration has displayed a commitment to needlessly lying that is confounding to even the most cynical observers of American politics.

No incident better summarizes this than a bizarre briefing by White House Press Secretary Sean Spicer on Saturday. Speaking in the Brady Briefing Room, Spicer laid into the assembled reporters.

Then came the big whopper: “This was the largest audience to ever witness an inauguration—period—both in person and around the globe.”

Spicer’s statement required dismissing all available evidence: ridership count, eyewitness testimony, independent crowd-counts, and Nielsen television ratings. Spicer cut his teeth at the Republican National Committee as the combative voice of a body often at odds with the media, but even by those standards, his furious insistence on assertions at odds with the evidence were peculiar.

They are, however, emerging as a hallmark of the administration.

Ahead of the inauguration, Trump threw a concert in front of the Lincoln Memorial. “This started out tonight being a small little concert, and then we had the idea maybe we’ll do it in front of the Lincoln Memorial,” Trump said in brief remarks. “I don’t know if it’s ever been done before. But if it has, very seldom.” That claim was also ridiculous, whether it was intentionally misleading or simply badly misinformed. There was a huge, widely covered concert at the memorial to kick off Obama’s inauguration festivities eight years ago.

But how is anyone to view Spicer’s statement as stemming from anything other than a deliberate intent to mislead? The facts are clear, and given that Spicer did not take questions, his main purpose on Saturday must have been to spread falsehoods about crowd size.

Top Trump aide Kellyanne Conway appeared on Meet the Press Sunday morning, where Chuck Todd grilled her on the incident. “The presidency is about choices. I’m curious why President Trump chose yesterday to send out his press secretary to essentially litigate a provable falsehood when it comes to a small and petty thing like inaugural crowd size,” Todd asked. Conway first tried to deflect, saying, “I don’t think presidents are judged by crowd sizes, they’re judged by accomplishments.” Fair enough, Todd said—so why lie?

Todd was flabbergasted by the Orwellian turn of phrase: “Alternative fact are not facts. They’re falsehoods.”

There’s still no good explanation for Spicer’s statement, but it fits with a long-running mantra from Trump aides and supporters that there’s no such thing as an objective reality. The question for Trump and his aides is simple: If you’re willing to lie about stuff this minuscule, why should anyone believe what you say about the really big things that matter?

Perhaps there is a solution to Trump's lies provided the media has the backbone to be responsible: When Trump and his administration make clearly false statements, simply do not give the statement coverage.  Take away the podium and do not disseminate the lies.
Posted by Michael-in-Norfolk at Sunday, January 22, 2017