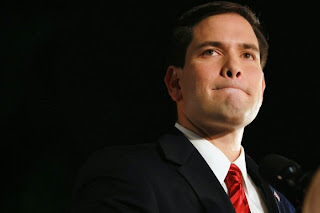 While members of the Republican Party presidential clown car try to conduct a juggling act of convincing Christofascists that they are sufficiently extreme to get the vote of the "godly folks" yet "mainstream" enough to attract sane voters, Marco Rubio has again let one of his balls hit the floor and revealed just how extreme he and his supporters are in fact.   A recent fundraiser was hosted by  Jennifer Lukawski, who recently served as the registered foreign agent for a western African regime known for its human rights abuses, including repeated threats to behead gay people.  What is frightening is that people like Lukawski are the norm in today's GOP.  Think Progress looks at this latest stumble by Rubio.  Here are highlights:

Senator Marco Rubio (R-FL), who announced last month that he will seek the GOP presidential nomination in 2016, will hold a campaign fundraiser on Wednesday with an array of Washington lobbyists. One of the lobbyists co-hosting the event (and helping to raise money for Rubio) is BGR Group principal Jennifer Lukawski. She recently served as the registered foreign agent for a western African regime known for its human rights abuses, including repeated threats to behead gay people.

In April 2013, BGR Government Affairs LLC and the then-Secretary General of The Gambia signed a contract. In exchange for $45,000 a month (plus expenses), BGR agreed to “advocate and help build support for increased political and economic assistance from government and non-governmental organizations. . . .

The government for whom Lukawski and BGR sought U.S. foreign aid was and is headed by His Excellency Sheikh Professor Alhaji Dr. Yahya Abdul-Azziz Jemus Junkung Jammeh. Jammeh, who seized power in a 1994 military coup was condemned on Saturday by U.S. National Security Advisor Susan Rice for his recent warning to LGBT people, “If you do it [in the Gambia] I will slit your throat — if you are a man and want to marry another man in this country and we catch you, no one will ever set eyes on you again, and no white person can do anything about it.”

In 2008, he warned gay and lesbian Gambians to leave the country before he could enforce policies “stricter than those in Iran,” and vowed to “cut off the head” of any who did not. In a 2013 speech to the United Nations — during BGR and Lukawski’s work for his government — he warned that those who “promote homosexuality want to put an end to human existence,” calling all “forms and manifestations” of homosexuality “very evil, anti-human, as well as anti-Allah.”

Jammeh’s human rights violations extend beyond his treatment of LGBT people. In her statement, Rice also noted an “alarming deterioration of the broader human rights situation in The Gambia,” and expressed deep concern about “credible reports of torture, suspicious disappearances – including of two American citizens – and arbitrary detention at the government’s hands.” Amnesty International has documented an array of violations under Jammeh and a March 2009 New York Times article noted “documented disappearances, torture and imprisonment of dozens of journalists and political opponents.”


Lukawksi did not immediately respond to a ThinkProgress inquiry about Jammeh and her work on his behalf. But her official biography notes that she previously worked for the anti-LGBT Heritage Foundation and as a top aide for former Rep. Robert Dornan (R-CA), a rabidly anti-LGBT flamethrower who once outed a fellow Republican Congressman on the House floor, accusing him of having a “revolving door on his closet.”


In a speech last week outlining his self-described “Rubio Doctrine,” Rubio claimed President Obama has “embraced regimes that systematically oppose every principle our nation has long championed.” But his campaign did not immediately respond to a ThinkProgress inquiry asking whether someone who was on Jammeh’s payroll is an appropriate person to have fundraising on his behalf.

Jammeh, of course, fits right with the Christofascists of the GOP base and his use of disappearances, torture and imprisonment parallel the policies of George W. Bush and Dick Cheney.