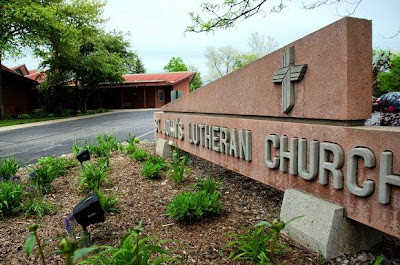 There are two main branches of the Lutheran Church - the Evangelical Lutheran Church in America which is gay accepting (I am a member) and the reactionary, ignorance embracing Missouri Synod Lutheran Church that is virulently anti-gay.   As seems to be always the case, it turns out that it is the vociferous anti-gay folks who are self-loathing closet cases and/or psychologically disturbed and obsessed with all things sexually.  A case in point: now former associate pastor Matthew Makela of St. John’s Lutheran Church in Midland, Michigan (pictured above).  As Queerty is reporting, Makela nearly drove one gay teen to suicide through his condemnation of homosexuality and attacks on the teen via social media.  Meanwhile, the hypocritical bastard was on Grindr seeking hook ups and describing himself as "a top who likes to cuddle."  Thankfully, Makela's career as a pastor is over and his foul, cowardly church been driven to apparently take down its website and post a mealy mouthed message to its parishioners.   Here is a portion of Queerty's story that blew the lid off of Makela's hypocrisy:

Until 2 p.m. on Monday, the ‘Our Church Staff’ section of St. John’s Lutheran Church and School’s website described Reverend Matthew Makela as an associate pastor who enjoys, “family, music, home improvement, gardening and landscaping, and sports.”

Screenshots obtained by Queerty from a source who asked that his name be withheld shed light on some of the Reverend’s other favorite past times — namely nude make out sessions and sex with other men.

Of course, how someone behaves between the sheets is really nobody’s business but his own, except when he’s actively doing damage to others. We’ve seen it time and time again. The lawmaker who spends his days fighting against gay rights and his nights cruising for bottoms, or the ex-gay activist who isn’t quite as ex-gay as he’d like everyone to believe.

Which brings us back to Makela. The married father of five from Midland, Michigan doesn’t just preach Jesus’ love and help with bake sales. He also uses his position of authority and respect in his community to broadcast his self-loathing view on same-sex attraction.

If Makela made even one LGBT kid at St. John’s “Christ-based” elementary school, their parents, friends, family or anyone who ever stepped foot in the church feel like being true to yourself is shameful (and it seems all too likely that he did), then we’re glad to share his hypocrisy with the world.

Thankfully, the story has gone viral and Makela is getting his just deserved.  Yes, I feel sorry for his family, but it is precisely because of the "teachings" of denominations like the Lutheran Missouri Synod that gays too often feel compelled to marry women and live false lives.  Here is how the main stream press is reporting on Makela's outing:

Officials at St. John's, 505 E. Carpenter in Midland, could not be immediately reached for comment. A phone number listed for Makela has been disconnected.

Makela was the subject of a story on the gay news website Queerty that showed screenshots of messages Makela posted to the mobile app Grindr — a male location-based social network. Grindr uses a mobile device's location-based services to show other posters closest to the user, according to its website.

Queerty reported that Makela confirmed the authenticity of the screenshots and declined comment. 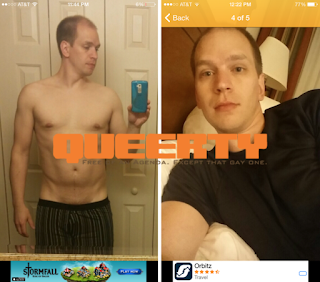 Sadly, there are lots and lots of individuals like Makela on church staffs and within the Republican Party.  Each and every one of them needs to be outed and their hypocrisy put on open display.
Posted by Michael-in-Norfolk at Friday, May 22, 2015