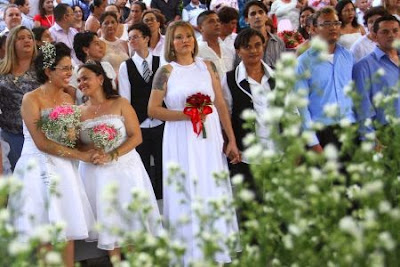 The city of Fortalez, Brazil is sponsoring a group gay marriage on June 28, see article in Portuguese. The cerimony will allow 50 couples to get married and each couple is allowed to invite up to 10 guests.  The ceremony is part of the growing acceptance of same sex marriage across South America.  Here is a Google translation of a portion of a piece in O Povo online:

A Second mass LGBT wedding with open enrollment will take place in Fortalez, Brazil.  The ceremony, which in 2014 married 60 people (30 couples), will be held in the Children's Park in Fortaleza Center.

The second collective homoafetivo wedding Fortaleza is receiving applications until June 8. This time will be 50 LGBT couples participating in the ceremony.

Each couple will be entitled to buffet and decoration, and may invite 10 people to attend the event, which will take place on 28 June. The date registers the World LGBT Pride Day and Municipal Awareness Day and LGBT Citizenship.

Progress continues despite the efforts of the Roman Catholic Church and other reactionary, backward looking religious denominations.