Hillary Clinton May Not Need to Change Her Image 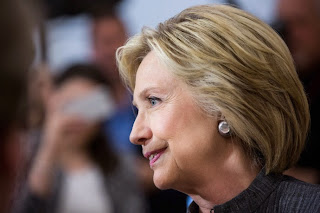 On the Republican side of the political agenda, we see all of the announced and would be candidates trying to be all things to all of the craziest elements of the GOP base.  In the process, most are looking disingenuous if not like complete political whores.  And in the process, besides looking like they have ventured off to crazy land, most will likely not change the impressions of the primary voters that they seek to court.  Thus, the question arises as to whether or not Hillary Clinton should try to change her impression on most voters and/or whether or not such a change is even possible.  A piece in the New York Times suggests that perhaps Hillary needs to stay true to who she is and stress her strengths.  Those who hate her will not be swayed and, if see tries to hard to change her image, she may turn off those who might have supported her.  Here are excerpts:

Jeb Bush has his famous last name as a calling card, for better or worse. But Scott Walker’s name does not ring many bells outside Wisconsin.  Ted Cruz is not even well known in Texas.

Republican presidential hopefuls will spend millions of dollars trying to get voters to remember their names and something that sets them apart. But the one White House contender who needs no introduction faces a different sort of problem: Everybody knows Hillary Rodham Clinton.

She did not just co-star in a national soap opera during her husband’s eight-year presidency: She reinvented herself as a senator from the nation’s biggest media market, New York; reintroduced herself again, this time to the nation, as a presidential candidate in 2008; and then remade herself into the country’s chief diplomat.  She never left the stage.

Not since Richard M. Nixon mounted a comeback in 1968, historians and pollsters say, has a candidate entered a presidential contest with so low a bar for name recognition or so high a bar for changing voters’ opinions.

Their specific challenges are hardly similar: . . . . Mrs. Clinton merely needs to rekindle interest in her as a candidate after a short hiatus from politics and a four-year tenure as President Obama’s emissary on the world stage.


But the campaign playbooks of Nixon and Mrs. Clinton seem to share some pages.

Mrs. Clinton, too, has been mostly ducking reporters and instead holding round-table discussions with carefully chosen voters in early voting states. (Aides say the questions those voters ask are not screened.) She has used the sessions to share lesser-known vignettes from her past: her mother’s impoverished upbringing; her middle-class childhood in Chicago; her work in the 1970s as an advocate for children; her juggling work and child rearing as a young lawyer in Arkansas.


At one event in Las Vegas, she sat with high school students whose parents are in the country illegally. It was a canny move: Young people and Latinos are two demographic groups whose opinions Mrs. Clinton may still be able to shape, Democratic pollsters say.  There are not many others.

On the bright side for Mrs. Clinton, she enters the race with a devoted base of supporters, mostly women, who appear solidly in her corner. Women in big states like Ohio and Pennsylvania heavily favored Mrs. Clinton in the 2008 Democratic primaries, driving her defeat of Mr. Obama in those states.

The slivers of swing voters Mrs. Clinton’s campaign hopes she can sway include married women in the suburbs. “They love her experience,” Ms. Lake said, “and they like the idea of having a woman president.”

The unknown “wild card” is whether Mrs. Clinton’s chance to make history as the first female president will motivate voters who may be less inclined to support her, Mr. Keeter said.

Trying too hard to change voters’ minds about a candidate’s character or life story can be a trap, as Mitt Romney discovered in 2012.

“Changing people’s deeply held views,” he added, “is the hardest thing to do in politics and in life.”