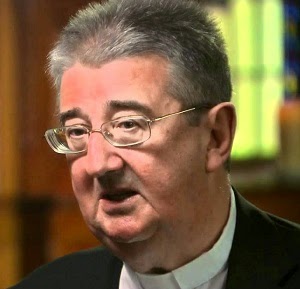 One of the few bright spots in the Irish Roman Catholic Church's sex abuse scandal has been Archbishop Diarmuid Martin who has been willing to call out those who engaged in coverups and a reign of intimidation against sex abuse victims.  Sadly, on the issue of same sex marriage, Martin has embraced the Church's 13th century "natural law" and come out on the side of ignorance and bigotry.  Perhaps it was to be expected, but it is yet another example of the Church's death wish in the west and modern countries as it slides towards becoming a church largely based in Africa and other regions where ignorant, uneducated populations.  Independent Catholic News looks at Martin's embrace of ignorance and bigotry.  Meanwhile, the Church finds itself on a head on collision with the Irish government as reported by NBC News.  It is a welcomed development that the government no longer does the Church's bidding.  Here are highlights:

Ireland will become the first country in the world to vote directly on same-sex marriage Friday in a neck-and-neck referendum that has seen most of the Catholic country's government and the church on opposing sides.


The earliest opinion poll in the campaign indicated a 'Yes' vote of 76 percent, but the gap between the sides has narrowed. Polls published Sunday suggested support for the 'Yes' campaign at between 53 and 69 percent. However, Irish prime minister Enda Kenny last week declared the race too close to call.

Kenny, who is advocating a 'Yes' vote, said Ireland "had gone on a journey from decriminalization of homosexuality [in 1993] … and now a step towards civil marriage."

In an interview with TV3, he asked: "Are the Irish people going to deny their own kith and kin the right to have a marriage contracted in civil law if that's what they wish to do?"

Leading the charge for a 'No' vote are the Catholic Church and associated think tanks, as well as groups such as Catholic Comment. A member of that group, Petra Conroy, told NBC News that the referendum is about "the unique mother, father and child relationship," adding: "I think we can have equality and leave marriage as it is."


U2 singer Bono has endorsed a 'Yes' vote, telling the Irish Independent that he believes the vote should not be seen as a religious issue.  "Think about it — trying to co-opt the word 'marriage' is like trying to co-opt the word 'love.' You can't own it," he said. "Marriage is now an idea that transcends religion. It is owned by the people. They can decide. It is not a religious institution. As far as I know, Jesus wasn't a married man and neither are most priests [who are] talking about it."


Dubliner and 'Yes' voter Gordon Hickey believes the country's constitution doesn't reflect modern Ireland and said he was "extremely worried" about the outcome of the referendum.

"The 'No' campaign claim it's about protecting children," he told NBC News. "Well I am someone's child. What about my rights? I want to be recognized as equal; gay people already feel like second-class citizens; having to beg our country to recognize us as equal just makes us feel worse."