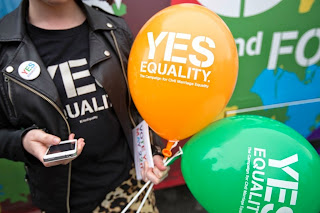 Ireland was once a bastion of Catholicism and exported priests around the world.  Now, the Church has lost much of its authority in the wake of the release of reports on the sexual abuse of minors by priests, the exposure of the horrors that took place at the Magdalene laundries, and in some ways worse of all, the cover ups and threats and intimidation of victims and their families by the Church hierarchy.  Mass attendance has plummeted and the Church finds itself a consistent opponent of modernity and some would argue, decency.  With Ireland poised to vote on same sex civil marriage tomorrow, the Church leaders find themselves with a new challenge: priest are opposing the Church's official anti-gay position.  Here are highlights from the Washington Post:


For the Rev. Pádraig Standún, a Catholic priest in western Ireland, voting “yes” is a matter of what’s right. To another Irish priest, the Rev. Iggy O’Donovan, it’s about creating an inclusive state.

“I’m gay myself,” he announced to his Dublin congregation in January. It was a surprise ending to Dolan’s homily, in which he urged his congregation to vote “yes” in the referendum. But his parishioners took it in stride — they gave him a standing ovation, according to the Belfast Telegraph.

As the Friday referendum approaches, Ireland seems poised to become the first nation to legalize same-sex marriage by popular vote. The Catholic Church itself opposes the measure.

In at least a few cases, though, Irish Catholics may vote “yes” not in spite of their priests, but alongside them. Standún, O’Donovan and Dolan are among a group of priests who have bucked Church leadership to voice support for the amendment. Speaking to BuzzFeed, The Rev. Tony Flannery, founder of the reform-minded Irish Association of Catholic Priests, estimated that 25 percent of the country’s clergy would vote”yes.”

[O]ne of many signs in recent decades of the greatly diminished influence of the Catholic Church, which also unsuccessfully opposed a 1995 referendum in which Ireland legalized divorce.


[T]the Catholic Church is practically the only major Irish institution opposing the referendum. The government supports it, as do major media organizations, unions and business groups. Even elderly church-going ladies have said they’re voting “yes.”

“I’m just going to vote for gay people because I have nothing against them. I can’t understand why anybody is against it; they’ve done no harm to anyone,” 83-year-old Rita O’Connor told the Irish Times on her way out of Sunday morning Mass in Dublin this month. “I think it’s a stupid carry-on the way the Church is going on at the moment, ridiculous.”

Rev. Flannery, who was suspended by the Vatican in 2012 for contradicting Church orthodoxy on issues like homosexuality and the ordination of women, said even the Church’s muted opposition could be damaging.

“This referendum in particular is one that is very attractive to the younger generation. For the official Church to be taking such a consistent no line on it, they’re just further alienating a group that has largely left the Church anyway,” he told Reuters. “I would have thought that, that was foolish.”