Maureen Dowd: The Need Remember the Iraq War Was Launched based on Lies 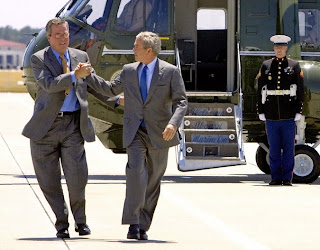 As Jeb "Jebbie" Bush tries to extricate himself form the fiasco he created by stating that he would have invaded Iraq as his idiot brother did, other Republican candidates are striving to couch the issue in "what we knew then and what we know now."  In short, they want the public to forget that the war was justified and launched based on deliberate lies and fabrications.  Stated another way, the war was the result of failed GOP policies and the sinister actions of GOP elected officials and their advisers.  Maureen Dowd has a column in the New York Times that reminds us that we must not be duped into believing the GOP revisionist history.  Here are excerpts:

It is simply not true, as Republican presidential aspirant Scott Walker said on Friday, that “any president would have likely taken the same action Bush did with the information he had.”
That’s not giving enough credit to W. and his frothing band of Reservoir Dogs.

It took a Herculean effort of imagination, manipulation and deception to concoct “the information” that propelled the invasion, occupation and destruction of a country that had nothing to do with 9/11.

Aside from the Blair poodle and the Coalition of the Willing-to-Overlook-Counterfeit-Claims, our allies tried to warn us. You know you’re in trouble when the Germans tell you that you’re too militaristic.

The Saudis thought Saddam was a monster, but, according to a Saudi official, they sent top emissaries to urge W. against war. Prince Saud, the foreign minister, and Prince Bandar, the ambassador in Washington, told the president that Saddam had assured them that he would allow the inspectors in. The Saudis explained what should have been obvious to the foreign affairs neophyte in the Oval Office: Saddam, who was writing romance novels, listening to Frank Sinatra and reading Hemingway’s “The Old Man and the Sea,” was simply blustering like any Arab despot would, trying to deter Iran with a big imaginary cache of W.M.D.

Everyone paying attention after 9/11 knew that the Bush crew had crudely and cynically switched villains, diverting America’s fury and fear from Osama, whose address was unknown, to Saddam, a reliable Bush family punching bag. They used patriotism like brass knuckles.

Karl Rove, who once thought the war would help build a Republican empire at home, still defends it.

But, as Senator Rand Paul bluntly argued last weekend while visiting a San Francisco tech company, America was better off with Saddam in power.

Col. Lawrence Wilkerson, the former chief of staff to Colin Powell, told the Concord Monitor that it was a “fair assessment” to say Iraq was better off under Saddam.

Jeb had barely finished insisting that he was his own man before he voluntarily shackled himself to W., putting several members of his brother’s war-torture-and-Katrina tarnished brain trust on his advisory list and telling a group of financiers in New York that W. was his top adviser on the Middle East!! :(

The 62-year-old was schooled on W.’s deadly Middle East legacy by a 19-year-old University of Nevada student, Ivy Ziedrich, who explained to the would-be leader of the free world that ISIS — which is gobbling up more and more pieces of Iraq — was not the virulent spawn of President Obama’s policies, but of his brother’s.

And consider this: Jeb hasn’t even been asked any questions yet about W.’s dark contributions on waterboarding, the deficit and the near-total collapse of the American economy.