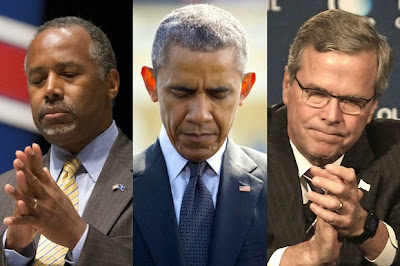 One thing that drives me crazy is the continued undue deference American politicians give to religion - a force for hate, division and discord across the centuries.  True, the phenomenon s the worse among Republicans who strive to out do each other in becoming will whores of the Christofascist, but Democrats likewise genuflect all too often to religious quacks and charlatans.  A piece in Salon looks at the distressing spectacle.  Here are excerpts:

CNN might wish to rename its show “This Week in Politics” as “This Week in God”; it’s getting that bad.  Just in the days between May 1 and May 7, for example, the Seventh-Day Adventist evolution-denier Ben Carson announced his intention to seek the 2016 Republican nomination, as did the Southern Baptist and onetime pastor Mike Huckabee.  The Episcopalian-turned-Roman Catholic Jeb Bush has puzzlingly refrained from following in their footsteps, but that he gave this year’s commencement address at that stronghold of unreason and superstitious darkness, the Jerry Falwell-founded Liberty University . . .

I note the religious affiliations of these potential contenders for the presidency because all are flaunting their faith, rather than keeping it a private matter of conscience, which in any other developed country it would be.  The gist is, unless you profess a piety befitting the mullahs of the Islamic Republic of Iran, things are going to get much, much more unpleasant for you before one or another God-coddler enters the White House in January 2017 to replace President Obama.

But I won’t deal with the faith-imbued cretinism of the Republicans in this essay.  What concerns me now is what President Obama has just wrought to insult that most aggrieved (yet steadfastly growing) American minority, the advocates of reason, those who insist on evidence before accepting the truth of a given proposition, especially grand propositions about the origins of the universe and our species.  On Wednesday, President Obama marked the deeply pathetic traditional outrage to rationalism that is the National Day of Prayer  . . .("NDOP")

The Constitution guarantees freedom of religion, and the precepts of the Enlightenment endorse it as fostering comity among nations.  Centuries of faith-fueled warfare and persecution in Europe convinced the Founding Fathers that a batty belief in an invisible “divine” Tyrant (and attendant, equally batty, equally invisible “Sons” and spirits and prophets and so forth) deserved no place in our government; it would be too divisive and subject to exploitation as a tool of repression.  Hence the First Amendment.

But there is a contradiction inherent in Obama’s act of “proclaiming” from the White House on National Day of Prayer; namely, that such a day should not exist, but since it does, the president should not avail himself of it to militate for the cause of faith.

Fresh challenges should be mounted until the NDOP goes the way of Jim Crow.  To do my part in the fight for true secularism, I hereby contest the constitutionality of Obama’s issuance of Lord-positive declarations from his podium as the chief officer of our officially godless republic, if only because such declarations menace the mental health and intellectual development of children.

The Proclamation’s subsequent palaver provides opportunities for parody, head-shaking and outright guffaws that no rationalist in need of levity can pass up.  “For many of us,” Obama declares, prayer is “an essential act of worship and a daily discipline that allows reflection, provides guidance, and offers solace.”  In what sense does murmuring petitions to a fictitious heavenly autocrat in the hope of procuring favorable outcomes constitute a “discipline”?  Science is a discipline, the study of philosophy is a discipline, judo is a discipline, even meditation is a discipline.  Appealing to an inexistent supernatural being is not a discipline, but, rather, an apotropaic ritual worthy of study by anthropologists and mental-health professionals.

Obama then informs us that prayer “gives us the strength to do God’s work: to feed the hungry, care for the poor, comfort the afflicted, and make peace where there is strife.”  Tell that to secular aid organizations such as Oxfam, USAID and the United Way (for more, see here), where, incidentally, no one spends donor money on proselytizing pamphlets or other venues for indoctrinating vulnerable people in occult dogmas.  No need to drag mysticism into humanitarian work.  Moreover, it is indisputable that religion (and especially Catholicism and Islam) does much to ensure the persistence of poverty and hunger across the globe.  The Catholic Church, in forbidding condom use in AIDS-ravaged Africa, among other places, has helped bring about 11 million orphans.  The Islamist aversion to educating women deprives entire populations of the intellectual potential of half their inhabitants, which hinders their societies’ rise out of poverty through the one proven effective way — the empowerment of women, . .


There's more, but you get the drift.  Overall, religion is not an uplifting or positive influence.