How Dubya Is Winning 2016 for Hillary 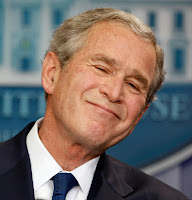 As noted in prior posts, one of the strongest positives going for Hillary Clinton so far in the 2016 presidential contest is that she isn't an occupant of the GOP clown car.  Perhaps in someways the most helpful Republican to Hillary's cause is the one not running: George W. Bush.  Thanks to Jebbie Bush's idiotic remarks on Iraq and on other issues, voters have been reminded of the disasters wrought on the country by the last Republican occupant of the White House.  A column in The Daily Beast looks at the specter "Dubya" has cast over the 2016 contest and how it is helping Clinton.  Here are excerpts:

What a delightful week, watching Republicans not Democrats sink in the foreign policy quicksand. For most of my adult lifetime—come to think of it, all of it, and pretty much all of my entire lifetime—to the extent that foreign policy has mattered in presidential campaigns, it’s been brandished by Republicans to accuse the Democrats of being soft on whatever the supposed threat was at the time. To think that we might have a presidential campaign in which the Democrats are the ones playing foreign policy offense, forcing the Republicans to profess that they are not war-mongering psychopaths, would be a thing to behold—as well as a measure, eight long years later, of how much damage George W. Bush and his co-belligerents did to the Republican Party.

It surely caught Jeb Bush by total surprise, the shitstorm that kicked up after his first answer about invading Iraq. Yes, he’s rustier than a 1970s Plymouth; yes, he appears not to have been really quite listening to Megyn Kelly; and yes, it’s beginning to dawn on all of us, God help us, that Dubya may have been the smart one.

Now, the cowboys have to prove their solution to every problem isn’t to invade it or bomb it. This may have been true for the 1976 election, during the Vietnam hangover. . . . . . Today, though, this question of reflexive Iraq hawkery is enough of a no-no that some people think Bush might already be sunk and should just quit now. And this is why we saw Marco Rubio also reverse himself last week (although he would deny that) on the Iraq War.

[I]n a general-election context, the GOP nominee will probably have to tack back pretty quickly toward the anti-war position. This will give Hillary Clinton a great opportunity. For one thing, it’ll weaken the salience of the whole “she can’t defend the country cuz she’s a girl” line of attack, which will come, however subtly. It will allow Clinton to define the terms of what constitutes a sensible foreign policy, and the Republican man will likely have to agree with her.

Contrary to liberals’ deepest suspicions about her, she is not a neo-conservative; she is not going to have regime change in Iran on her mind, which any of the Republicans as president would, except for Rand Paul.

Poor Republicans! Crime is down; they can’t scream law and order. And now war is unpopular, so they can’t say the Democrats are soft on whomever. Their economic theories are increasingly discredited. I guess that leaves the old standby: race-baiting. But we may have reached a point where that doesn’t work anymore either. Should be an interesting race.