May 17, 2015 (cont): Last night, the husband and I and our friend Rob did check out a few of the gay clubs in the Marais neighborhood.  Being a Sunday night, things were not that busy from what we saw.  We stopped at Raidd where things were slow, although later this week we plan on checking it out again, most likely on Thursday.  The place that was really hopping was Freedj, a dance club.  The music was great and the crowd was a nice mix of younger, older and some straight couples.  The scene below is of the lower level dance floor (I want to visit again later in the week). 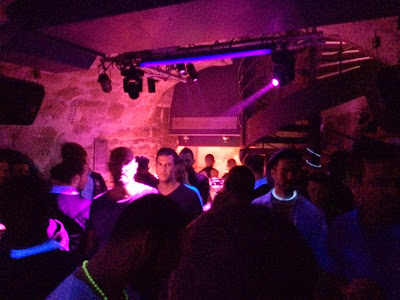 Today was another amazing but exhausting day that included going to the Louvre, walking the Galleries Lafayette, hitting shops along the way, and then this evening doing a dinner cruise on the Calife dinner cruise highly recommended by a friend who visited Paris last September.  The Louvre is overwhelming (to see the entire collection would takes days or even a week), but we hit high points that included the Mona Lisa, the Winged Victory of Samothrace, Napoleon's apartments and sculptures by Michelangelo.  Here are some random photos: 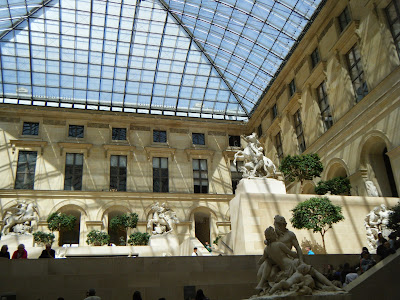 Our best shopping was along the Avenue de Opera.  Galleries Lafayette is amazing, but pricey.  Nonetheless, it was worth the visit just to see the store's domed atrium:

The absolute highlight of the day was the dinner cruise.  The food was wonderful (our Auntie Mame like friend treated all of us), the wait staff attentive - and gorgeous - and the views from the riverboat striking:


Now?  We are all exhausted and satiated and headed to our respective bedrooms!  So far, this trip has truly impressed me with the French sense of style, the friendliness of the people, the handsomeness of many of the men, and the fact that America could learn a lot from this country.