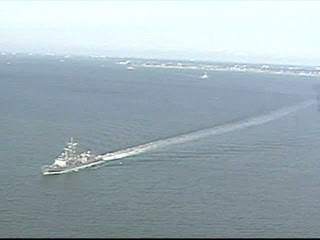 As noted earlier, Hurricane Irene is dominating the local news - and newscasts up and down the eastern seaboard. Coming across the Hampton Roads Bridge Tunnel ("HRBT") to work this morning from Hampton to Norfolk, I saw an unusual sight: a column of Navy vessels steaming toward the tunnel on the harbor side of the HRBT and a column headed towards the mouth of the Chesapeake Bay and the open Atlantic on the other. The photo above from WAVY-TV 10 gives a sense of the view (a video which is hazy because of the smoke from the still burning fire in the Great Dismal Swamp can be seen here). WAVY also reports as follows:

The U.S. Navy has ordered the Second Fleet in Virginia to leave Norfolk Naval Station to keep the ships safe Hurricane Irene, which is approaching the East Coast.

Thursday's order applies to 64 ships in southeastern Virginia. Twenty-seven ships are moving out to sea, beginning at 8 a.m. Another 28 are being moved to other places such as repair shipyards that are safer than the piers at Norfolk.

Nine ships are already at sea. The Navy says ships that are under way can better weather such storms. It also will help protect piers from being damage.

It increasingly looks like we will not escape a major impact from the storm. Earlier, I bought the last flashlights at the Rite Aid across the street from the office.

Posted by Michael-in-Norfolk at Thursday, August 25, 2011