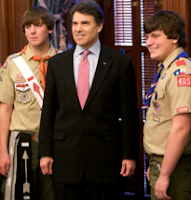 It seems that with each passing day there are more and more reasons to dislike Texas Governor Rick Perry who I will henceforth refer to as the Chimperator II. As Time magazine is reporting, in Perry less than inquisitive, pea sized brain, gays are the likened to alcoholics and advised to simply live their entire lives as asexual celibates. As noted in a post this morning, only in today's Republican Party can one expect to see ignorance and idiocy as positive attributes. Increasingly, Perry makes Chimperator Bush seem like a genius. Here are some highlights from the Time piece:

The origin of homosexuality has become something of a political litmus test for presidential candidates, almost akin to their stance on abortion. Candidates are now expected to explain whether or not they believe homosexuality is a hard-wired predisposition. It’s an important distinction, and how candidates broach the issue can really matter. Just ask Ken Buck, who drew criticism when he compared same-sex attraction to alcoholism on NBC’s Meet the Press in October 2010 during his unsuccessful Senate run in Colorado.

Since leaping into the GOP presidential race, Texas Gov. Rick Perry hasn’t been asked if he thinks gays are born or made. But in a little-noticed passage in his first book, “On My Honor,” a encomium on the Boy Scouts published in 2008, Perry also drew a parallel between homosexuality and alcoholism. “Even if an alcoholic is powerless over alcohol once it enters his body, he still makes a choice to drink,” he wrote. “And, even if someone is attracted to a person of the same sex, he or she still makes a choice to engage in sexual activity with someone of the same gender.”

In “On My Honor,” Perry also punted on the exact origins of homosexuality. He wrote that he is “no expert on the ‘nature versus nurture’ debate,” but that gays should simply choose abstinence. Perry’s campaign did not respond to a request for comment on whether he maintains this view.

If anyone should have remained celibate, it's Perry's parents. Even as Perry prostitutes himself to gay-hating Christianists the Time story notes that a new HRC poll found the following:

A poll released late last month by the Human Rights Campaign, a gay rights advocacy group, found that a majority of Americans now support marriage for same-sex couples, three quarters of men say they could be friends with a gay man and nearly 60% of Americans would not mind if their grand child were gay.

Posted by Michael-in-Norfolk at Wednesday, August 24, 2011