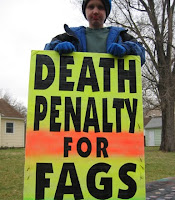 Hate speech and constant anti-gay screeds by professional Christians and GOP demagogues do have consequences. So does the continued propagation of the "ex-gay" myth that makes bigots believe that we gays choose to be they way we are. Together, these forces create an atmosphere where anti-gay violence is not only impliedly condoned but actually encouraged. The latest victim of 19 year old Marcellus Richard Andrews who was to begin studies in interior design this fall. As the story in the Waterloo Courier indicates, the bullies sought out their victim:

Night found him at Nakita Wright's home on Cottage Street. She said the problems started at about 12:45 a.m. Friday when she and Tudia Simpson, her cousin, went for a walk down the street. Andrews opted to stay behind, waiting on the enclosed porch, she said.

The two women hadn't made it as far as Adams Street a block away when they heard yelling back at the house. They ran back and found a truck stopped in the street, and the occupants were taunting Andrews, calling him "faggot" and "Mercedes," a feminization of his first name, Simpson said. The arguing and name calling continued, said Simpson, who admitted throwing the first punch, striking a girl.

"She kept saying it, and I hit her," Simpson said. From there, the fight was on, with Nakita Wright and the others joining in, according to their account. At some point during the scuffle, Nakita Wright felt her leg brush against something on the ground. She looked down and saw Andrews.

"I tried to help him up, and then this boy ran back and kicked him in his face," Nakita Wright said. After the brawl ended, she tried helping Andrews to his feet. He appeared dazed. She grabbed one arm and coaxed him as she lifted. He pushed up with his other arm, but then gave up.

Andrews had studied at La James College and took part in Job Corps. He had bought his Hawkeye college textbooks earlier in the week. Authorities continue to investigate the assault. No arrests have been made in the case.

I hope Michele Bachmann, Maggie Gallagher, Tony Perkins, Don Wildmon, Pope Benedict XVI and countless others like them are all please with their handiwork. In some ways they bear as much responsibility for this senseless murder as those who beat Andrews to death. Stories like this physically sicken me. When are those in the media going to confront these hate merchants and call them out for the foul individuals that they are and stop allowing bigots to hide behind religion?
Posted by Michael-in-Norfolk at Monday, August 22, 2011